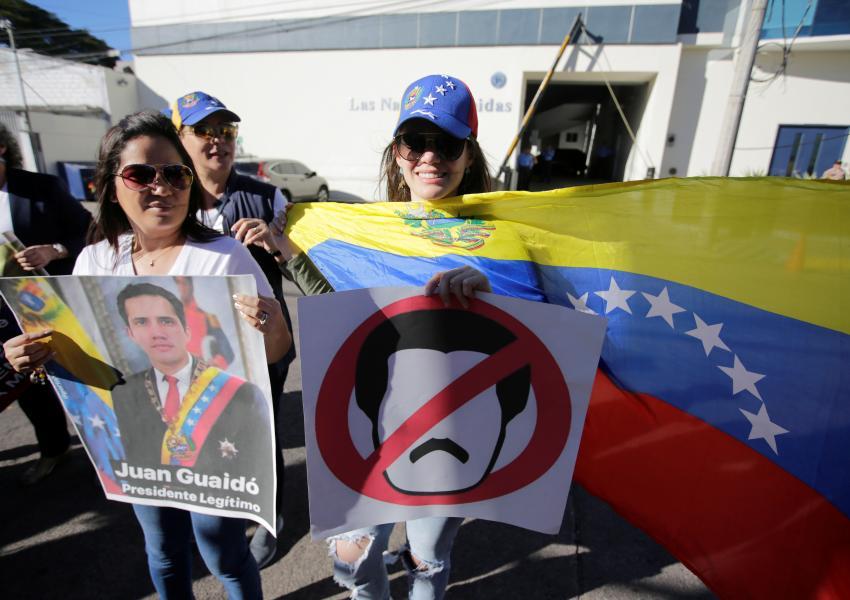 Iran Supports Maduro as the President of Venezuela

Iran announced its support for Maduro as the president of Venezuela and condemned any foreign intervention in that country.

Venezuela, one of the largest oil exporters in the world, currently has two presidents who claim to be the legitimate rulers of the country.

Nicolas Maduro says that he has won the recent election, however, the opposition leader Juan Guaidó, who is the head of National Assembly (parliament) says that election was a fraud. Mr. Guaido was sworn in as interim president at a gathering of tens of thousands of protesters.

Bahram Ghasemi, the spokesman for the Islamic Republic foreign ministry said on Thursday, January 24: “The Islamic Republic of Iran opposes any foreign intervention in Venezuela’s domestic affairs and supports Venezuela against any illegitimate action against the government and the people of the country.”

But the United States, Canada, Brazil, Chile, Colombia, and a few other countries have already recognized Mr. Guaido as the new interim president of Venezuela.

On the other side, Bolivia, China, Russia, and Turkey have supported Maduro.

Maduro has ordered American diplomats to leave the country. But Juan Guaido, the leader of the opposition has asked the diplomats to stay in the country. The protests against the economic and political conditions of Venezuela has spread across the country.

Hundreds of thousands of people protested against the government in the capital city of Caracas. At least four were killed.

According to Reuters, on Wednesday, in a rally of tens of thousands of protesters, Mr. Guaido, the head of parliament, demanded a free election to end the reign of Maduro, and swore as the new interim president.

A few minutes after Mr. Guaido’s announcement, President Trump announced that he recognizes Guaido as the president.

He said Washington supports the efforts of Venezuela’s parliament in establishing an interim government and preparing the country for “free and fair” elections.

City officials in Iran's capital Tehran are planning to put locks on large waste containers in the streets to prevent garbage pickers from accessing waste. END_OF_DOCUMENT_TOKEN_TO_BE_REPLACED

The Biden Administration has confirmed to the US Congress that sanction imposed by its predecessor on Iran have drastically reduced Iran's trade with the world. END_OF_DOCUMENT_TOKEN_TO_BE_REPLACED

The UK government said on Sept 20 that Britain would "not rest" until all its dual nationals being held in Iran were returned home. END_OF_DOCUMENT_TOKEN_TO_BE_REPLACED