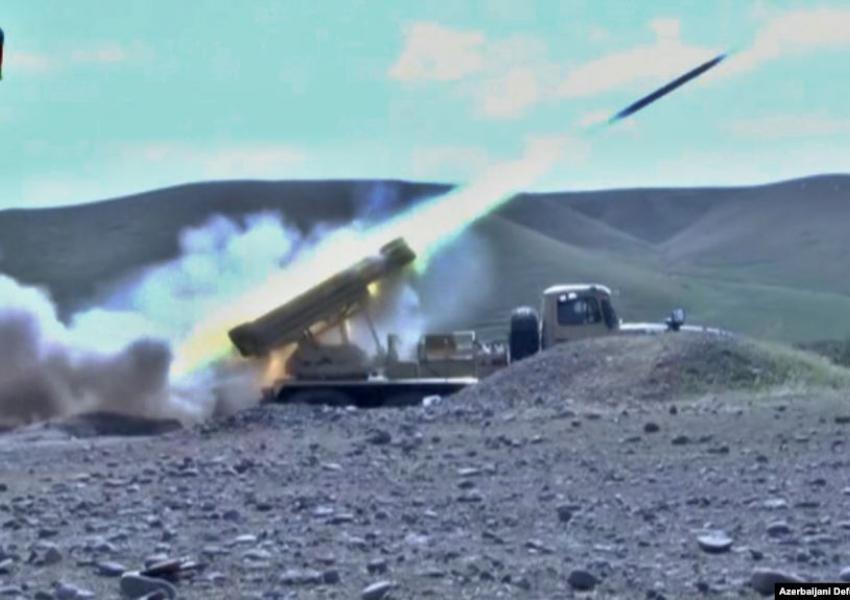 Despite its support for Azerbaijan’s claim to the Armenian-held enclave of Nagorno-Karabakh, Tehran is becoming increasingly concerned over Azerbaijan receiving assistance both from Sunni extremists and Israel.

Tehran sees a national security threat in the presence near its borders of militant Sunni Islamists − or “takfiri”, literally those who accuse others of apostasy, as Iranian officials call them.

Brigadier-General Abolfazl Shekarchi, spokesman for Iran’s Armed Forces on Saturday [November 7] reiterated warnings over “takfiri terrorists” allegedly drafted by Turkey to fight alongside Azerbaijani forces in the Nagorno-Karabakh conflict, which flared up on September 27.

“Our demand from both sides in the [Nagorno-]Karabakh conflict is [not to allow] takfiris’ presence in the region in any manner… The Islamic Republic will definitely not tolerate their presence in any way,” Shekarchi said in an interview with Mizan Online.

On October 6, Ali-Akbar Velayati, foreign policy adviser to Iran’s Supreme Leader Ali Khamenei, aired similar worries. In an interview with Kayhan newspaper, which is funded by the Leader’s office, Velayati said those who had brought Sunni fighters “should be held accountable.”

Iran would not tolerate that “terrorists who are being used by America and Israel are based near our borders,” Velayati warned. Iran has long accused outside powers – including Saudi Arabia, the US and Israel – of encouraging armed factions among its most populous, mainly Sunni ethnic groups, the Kurds and Baluchis.

Shekarchi highlighted Israel’s role: “Another important issue is the presence of Israeli espionage stations. We will not, in any manner, allow the establishment of this regime’s bases close to our borders and in the disputed area and [where there is] conflict.”

While Tehran considers Baku a US ally, it is unsure as to how close are its relations with Israel. Some analysts have suggested Azerbaijan supplies Israel with oil, and that Baku has received military assistance including drones while also allowing Israel air and electronic-intelligence access to Iran.

In his interview, Shekarchi reiterated Iran’s policy of respecting the internationally-recognized territorial integrity of Azerbaijan and therefore the return of Nagorno-Karabakh to Baku along with respect for the rights of the Armenians in the disputed areas.

This followed Khamenei setting out Iran’s position on November 3 in a televised speech. “Territories seized by Armenia must be returned and liberated, this is an essential condition,” he said. “These lands belong to Azerbaijan, which has every right over them…[while] the security of Armenians who live in these lands must [also] be ensured.”

Iran wants to maintain good relation with Russia, which supports Armenia and is worried that a prolonged conflict in Nagorno-Karabakh will encourage Sunni extremism in the Caucuses and central Asia.

Tehran also has unease over pan-Turkish separatism in its own northwest, which is mainly Azeri. Iran has an estimated 15 million Azeri speakers, whose language is closely related to the Azeri spoken in Azerbaijan and more distantly to Turkish. Many Iranian Azeri sympathize with the Republic of Azerbaijan over the conflict, and some have pan-Turkic sentiments.

Azerbaijan is not only Muslim, but has a Shiite majority, which is important to Iran’s Shiite establishment. Shiite clerics, including the Supreme Leader’s representatives in the Azeri-speaking regions of Iran, have openly called the Azerbaijani casualties in the conflict “martyrs” despite their disdain for the often secular pan-Turkism found in these areas.

City officials in Iran's capital Tehran are planning to put locks on large waste containers in the streets to prevent garbage pickers from accessing waste. END_OF_DOCUMENT_TOKEN_TO_BE_REPLACED

The Biden Administration has confirmed to the US Congress that sanction imposed by its predecessor on Iran have drastically reduced Iran's trade with the world. END_OF_DOCUMENT_TOKEN_TO_BE_REPLACED

The UK government said on Sept 20 that Britain would "not rest" until all its dual nationals being held in Iran were returned home. END_OF_DOCUMENT_TOKEN_TO_BE_REPLACED