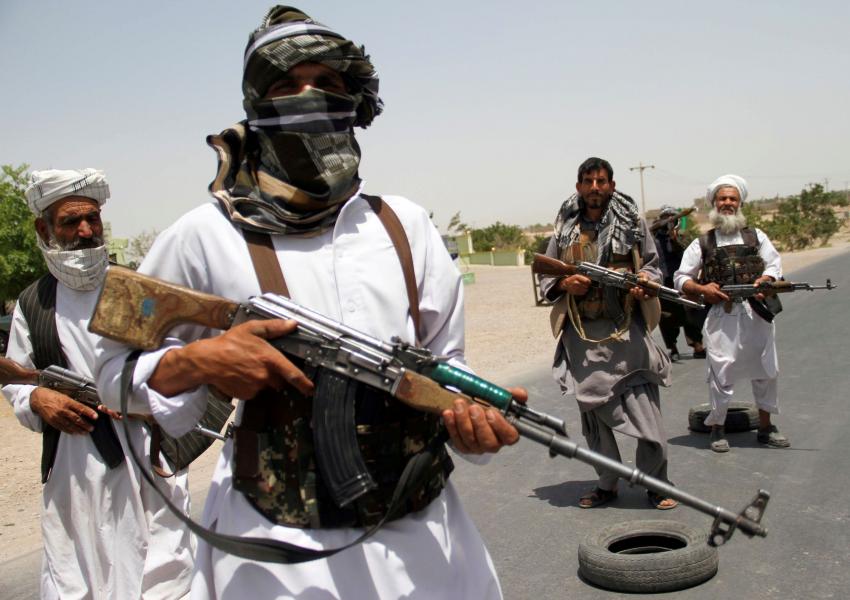 In a statement Monday, Ayatollah Asadollah Bayat-Zanjani, an outspoken Shiite source of emulation, issued a strong condemnation of the Taliban, whose sway in Afghanistan is increasing with the withdrawal of United States military forces after a two-decade presence.

Bayat-Zanjani, a member of the reformist Association of Combatant Clerics and close to former President Mohammad Khatami, called the Taliban "a radical, violent and terrorist" group and compared them with the Islamic State group, Isis, or Daesh.

Meanwhile, residents are mobilizing to fight to save Herat, one of Afghanistan's largest cities near Iran and home to Persian-speaking Hazaras who see the Taliban as a grave danger to their security. Afghans on social media are appealing for moral support from Iranians.

"The Taliban and the Islamic State are not only a political, social and military current, they are [adherents of] a borderless [way] of thinking and not confined to Afghanistan, Iraq, Syria, Pakistan and Arab countries," Bayat-Zanjani wrote.

The cleric’s criticism was also directed at those in Iran, including the flagship principlist newspaper Kayhan, who have portrayed the Sunni Taliban as a moderated force – at least compared to 20 years ago – or who have argued that Tehran has to come to terms with them, especially since United States President Donald Trump reached agreement with the Taliban in 2020 over US troop withdrawal. Bayat-Zanjani suggested that a similar Islamic fundamentalism – a Shiite version ­– could be fostered in Iran through indifference to "violent and merciless readings of Islam."

The likely return to power of the Taliban poses potential challenges for Iran, which co-operated with the US in its intervention in Afghanistan in 2002 having had bitter relations with the Taliban going back before 1997, when diplomatic relations were severed after eight Iranian diplomats were kidnapped and killed.

The conservative Jumhuri Eslami daily reported last month that a new Shia group had been formed in Afghanistan, with Iranian support, to resist the Taliban. The report was denied by officials and condemned by Afghan government.

Since Trump’s agreement with the Taliban, the group has have made considerable territorial gains in areas near Iran. In July they captured two major border crossings, at Islam Qala in Herat province and at Abu Nasr Farahi in western Farah province.

The Taliban have practically besieged Herat, western Afghanistan, and have launched attacks on Lashkar Gah and Kandahar in western and southern Afghanistan within relatively close proximity to Iran. Anti-Taliban warlord and commander Ismail Khan has reportedly mobilized citizens in defense.

Preparing for the worst

Many in Herat are now preparing for the worst. The city’s fall to the Taliban could cause a huge influx of refugees to Iran, which already hosts millions of Afghan refugees and economic migrants. Such an exodus would add to the existing burden on the ailing Iranian economy and healthcare system, with Tehran already reporting that international organizations offer insufficient resources to support displaced Afghans.

Iran's president Ebrahim Raisi addressed the UN General Assembly saying his country wants a resumption of nuclear talks with world powers to lead to the removal of US sanctions. END_OF_DOCUMENT_TOKEN_TO_BE_REPLACED

President Joe Biden told the UN General Assembly on September 21 that he will prevent Iran from getting nuclear weapons. END_OF_DOCUMENT_TOKEN_TO_BE_REPLACED

India has seized nearly three tons or $2.72 billion worth of Afghan heorin shipped from Iran. END_OF_DOCUMENT_TOKEN_TO_BE_REPLACED

Iran's foreign ministry spokesman has said that nuclear talks with world powers will start in a few weeks but has not given a firm date. END_OF_DOCUMENT_TOKEN_TO_BE_REPLACED