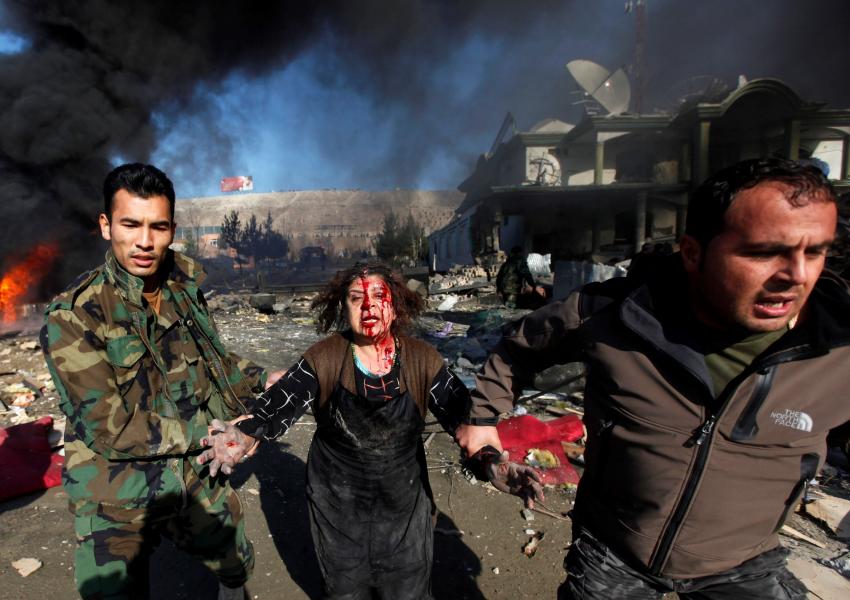 Several Iranian religious reformists as well as the National Front of Iran, a nationalist group established in the 1950s to support -then- Prime Minister Mohammad Mosaddeq, have strongly criticized the Islamic Republic for trusting the Taliban and denounced Tehran's "shameful and annoying" behavior in whitewashing the group's record.

The National Front of Iran characterized the takeover of Afghanistan by the Taliban as "Occupation of Afghanistan by reactionary Taliban terrorists" in an August 18 statement published on the front's website, and called it a humanitarian catastrophe condemned by history.

The National Front attributed the Taliban takeover to "ethnic divides, financial corruption, and lacking a plan and an outlook for exiting the Afghan crisis, as well as the astounding incapability of government forces to stand against the Taliban.

The Front called the behavior of part of the Iranian government in trying to cleanse the Taliban, shameful and annoying. The statement stressed that Iran should have stood beside the Afghan nation rather than the "Taliban occupiers" who are devoid of culture and humanity.

While denouncing the Taliban as "criminal beasts, the National Front praised Afghanistan's cultural background and denounced the Taliban takeover as "returning to the inflexible past and fighting humanity."

The National Front said, "part of the Iranian government sees the Taliban's return and takeover of Afghanistan, as the realization of their own dreams to bring reactionary elements to power in Iran."

Meanwhile, a group of religious reformists in Iran and abroad warned "the rulers of the Islamic Republic of Iran" against "blind anti-Americanism" and "trusting the Taliban."

The group including former cleric Hassan Yusefi Eshkevari, Abdol Ali Bazargan, Alireza Rajaei and Reza Alijani, and several others from different generations stressed in their statement that "We stand with the oppressed people of Afghanistan and call on the free governments of the world to support the people of Afghanistan in the current situation and respect the achievements of their civil society."

In another development, while newspapers in Iran are a long holiday until Saturday, August 21, The editor of conservative daily newspaper Jomhouri Eslami, prominent cleric Massih Mohajeri, wrote in a post in the newspaper's Telegram channel, "The Taliban is promising civil liberties including women's rights to deceive the people and buy time before they can establish their fundamentalist government."

Mohajeri observed that some Taliban elements even went to Shiite mausoleums and mosques in Afghanistan too pay respect to Shiite rituals while the sect's member were taking part in mourning ceremonies to mark the martyrdom of the third Shiite Imam in Muharram.

The conservative editor warned that the Taliban will ignore all of their promises as soon as they can establish their power and tighten their grip over the Afghan society. Then they will try to impose their medieval ideas on the Afghan society.

Mohajeri opined that the Taliban came to power last week as part of a conspiracy and that everything in the takeover, including the behavior of the country's former president and the commanders of the Afghan army were part of a pre-planned show.

He also claimed that Taliban leaders have told their men to wait until the group captures Panjshir, currently held by Ahmad Massoud, the son of the legendary Afghan Mojahedin commander Ahmad Shah Massoud, and then start to try and execute opposition figures.

Mhajeri also charged that there are analysts in international media who are paid to beautify the Taliban and sell it to the world's public opinion. He warned the Iranian government to revise their stance about the Taliban before the group puts its mask away and returns to its old violent ways.

Iran's president Ebrahim Raisi addressed the UN General Assembly saying his country wants a resumption of nuclear talks with world powers to lead to the removal of US sanctions. END_OF_DOCUMENT_TOKEN_TO_BE_REPLACED

President Joe Biden told the UN General Assembly on September 21 that he will prevent Iran from getting nuclear weapons. END_OF_DOCUMENT_TOKEN_TO_BE_REPLACED

India has seized nearly three tons or $2.72 billion worth of Afghan heorin shipped from Iran. END_OF_DOCUMENT_TOKEN_TO_BE_REPLACED

Iran's foreign ministry spokesman has said that nuclear talks with world powers will start in a few weeks but has not given a firm date. END_OF_DOCUMENT_TOKEN_TO_BE_REPLACED