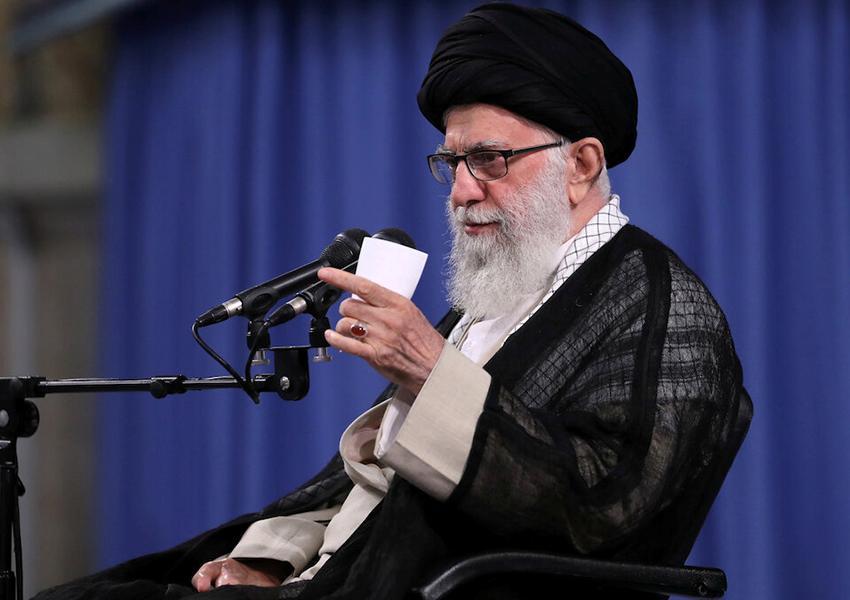 Khamenei: Western intelligence services behind protests in Iraq and Lebanon

The leader of the Islamic Republic of Iran, Ali Khamenei addressed the protests in Iraq and Lebanon and claimed: “America and Western intelligence services, financed by the regressive countries of the region, are causing chaos.”

In a military ceremony in Tehran on Wednesday, Khamenei said: “The worse harm that the enemies can do to a country is to undermine its security, which is what they are doing in some countries of the region; taking away people’s security.”

The leader of the Islamic Republic addressed the protesters in Iraq and Lebanon and said they must follow up on their demands through “legal structures” and “make restoring security their priority.”

Previously, Mahmoud Vaezi, President Rouhani’s chief of staff had accused the United States, Israel, and Saudi Arabia of involvement in the protests in Lebanon and Iraq and said: “Their goal is to present a corrupt image of the clergy and legal political parties of Iraq and also creating a divide between Iran and Iraq.”

He claimed that “the United States, Saudi Arabia, and the Zionist regime” are exploiting people’s demands, controlling the online narrative, creating narratives, and providing financial support.

According to Vaezi, the Islamic Republic’s position is that the governments should listen to people’s demands, but the demands must be expressed in a way that does not cause chaos and destruction and death. He added: “Iran and Iraq must we vigilant so the foreigners cannot achieve their goals.

These comments are made at a time when Iraqi protesters have also been chanting against the Islamic Republic regime of Iran, and in Lebanon, the protesters are clashing with Iran-backed Hezbollah forces.

Vaezi also strongly criticized those who oppose the Financial Action Task Force (FATF) bills being passed in the parliament.

The bills against money laundering and financing terrorism are strongly opposed by those close to the supreme leader of the Islamic Republic.

Vaezi also criticized the state-TV for only presenting the opposing side of the argument in this case and even editing the president’s speeches.

City officials in Iran's capital Tehran are planning to put locks on large waste containers in the streets to prevent garbage pickers from accessing waste. END_OF_DOCUMENT_TOKEN_TO_BE_REPLACED

The Biden Administration has confirmed to the US Congress that sanction imposed by its predecessor on Iran have drastically reduced Iran's trade with the world. END_OF_DOCUMENT_TOKEN_TO_BE_REPLACED

The UK government said on Sept 20 that Britain would "not rest" until all its dual nationals being held in Iran were returned home. END_OF_DOCUMENT_TOKEN_TO_BE_REPLACED