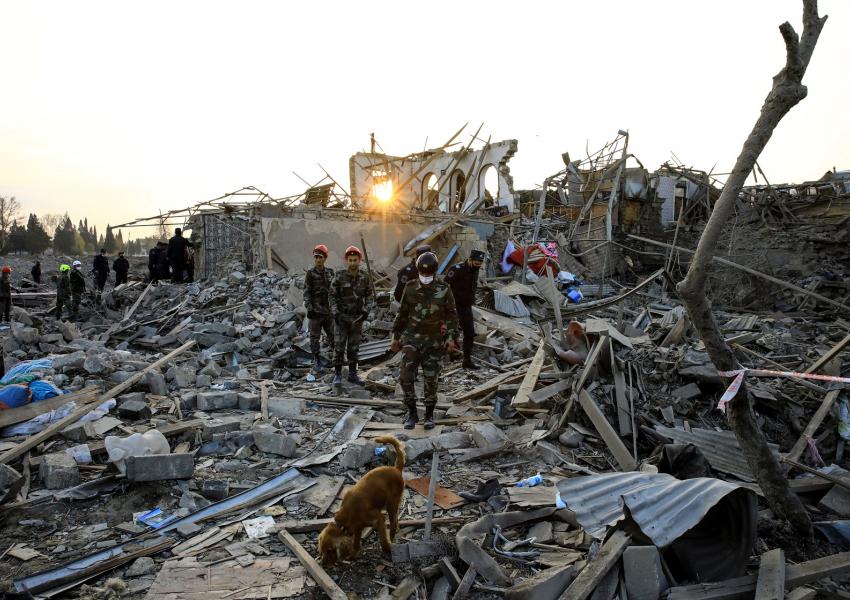 The Iranian government has welcomed the Russian-brokered Nagorno-Karabakh deal between Azerbaijan and Armenia, which took effect on Tuesday [November 10], 1am local time, 9pm GMT Monday.

The agreement is seen broadly as a victory for Azerbaijan, as it will see Baku holding areas of Nagorno-Karabakh its forces have captured since fierce fighting flared up on September 27, and Armenia is to withdraw from other adjacent areas in the next few weeks. The deal prompted celebrations in Baku and protests in Yerevan.

Offering to assist with Russian peace-keeping troops, Iran has stressed it expects parties to the agreement to respect the principles it has outlined since the conflict erupted. A government statement released Tuesday said Tehran expected respect for “sovereignty and territorial integrity,” ending “occupation” with the right of refugees to return home, respect for minority rights, and “expelling all takfiri and foreign fighters.” The last requirement refers to the reported arrival of militant Sunni fighters from Syria to fight alongside Azerbaijani forces.

Public and media reaction in Iran has, however, focused on concerns over increased Russian and Israeli influence, and on the possibility that a new transit corridor to be opened through Armenian territory between Azerbaijan and an Azeri enclave could disadvantage Tehran.

The Tasnim news agency, which is affiliated to the Islamic Revolutionary Guard Corps (IRGC), in an uncredited commentary asked whether changes that Baku intended in border areas would be with Iran’s consent or taken unilaterally. The commentary urged Baku to respect Iran’s stance on avoiding “geo-political changes” in the region: “As one of the important and strong players in the region, Iran attaches special importance to the security of its northern borders. Other players must give special consideration to that.”

The muted concern over possible “geo-political changes” may relate to Armenia’s agreement to a transport corridor through its territory to link mainland Azerbaijan with the Nakhchivan Autonomous Republic, which has borders only with Armenia, Turkey and Iran.

The corridor – to be supervised by Russian peace-keepers for five years – will create a direct transit route for Azerbaijan not just to the Nakhchivan Autonomous Republic but on to Turkey. Ankara would gain direct access to Baku and the central Asian republics, an alternative to the current route, avoiding Armenia, though Iran.

“The main loser is Iran, which will be losing millions in transit revenues,” a reader of Tabnak, a conservative website, commented on the peace deal. “Turkey will now be easily connected to the Caspian Sea [region] and to Baku through Armenian soil at no cost.” This amounted to “the worst scenario for Iran,” the reader opined.  His argument had 103 thumbs-up against 12 thumbs-down by Tuesday afternoon.

Overall reactions to the agreement from the Iranian public have been mixed. While some readers’ comments on websites and social media posts favor Azerbaijan’s “victory” for ethnic or religious reasons, given Iran has a substantial Azeri population and generally shares Shia Islam with Azerbaijan, others disapprove of the new arrangements, expressing suspicion of Russia and disdain for Turkey, which some claim is the biggest winner.

Readers of Mashregh News, a hardline website, appeared more concerned about ‘gains’ for Israel, which has relatively close relations with Baku and has reportedly supplied Azerbaijan with military hardware. “Israel did what it wanted and has gained control over the region for many years,” one noted.

City officials in Iran's capital Tehran are planning to put locks on large waste containers in the streets to prevent garbage pickers from accessing waste. END_OF_DOCUMENT_TOKEN_TO_BE_REPLACED

The Biden Administration has confirmed to the US Congress that sanction imposed by its predecessor on Iran have drastically reduced Iran's trade with the world. END_OF_DOCUMENT_TOKEN_TO_BE_REPLACED

The UK government said on Sept 20 that Britain would "not rest" until all its dual nationals being held in Iran were returned home. END_OF_DOCUMENT_TOKEN_TO_BE_REPLACED

There will be no meeting of the Iran nuclear deal participants on the sidelines of the UN General Assembly this week, the EU and Iran have announced.
3 hours 31 sec ago