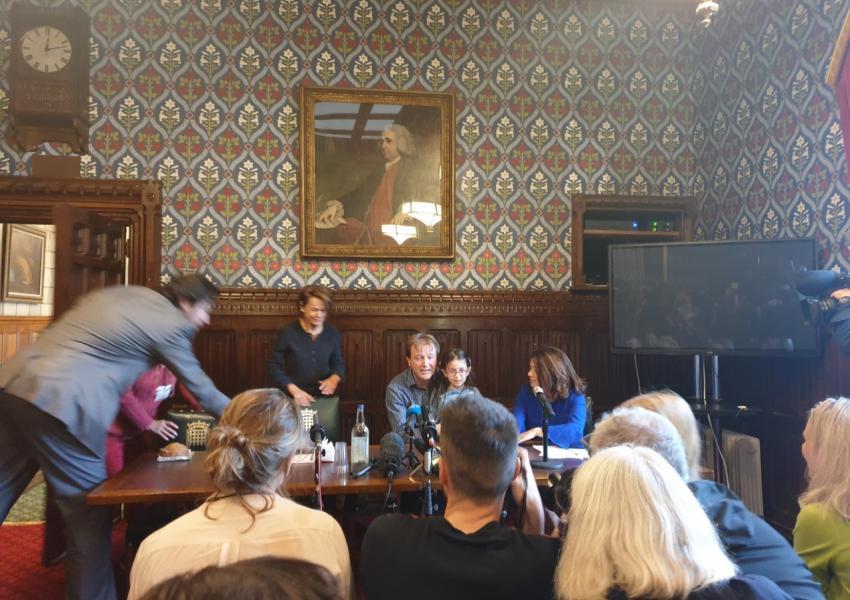 In a press conference after his daughter’s arrival in Britain, Richard Ratcliffe, husband of the British-Iranian national Nazanin Zaghari-Ratcliffe who is incarcerated in Iran said that the Islamic Revolutionary Guard Corps (IRGC) was monitoring every step of this trip.

Ratcliffe said on Friday that the steps they went through to get the approval for bringing his daughter back were difficult and unclear, and explained that they didn’t know what was going to happen until the last hours: “We were waiting for the approval letter from the Revolutionary Guard (IRGC) which finally arrived…”

He explained that Nazanin’s conditions are even worse and gaining access to her and calling her on the phone is even more restricted than before, and he predicted that her physical and mental conditions will deteriorate even further with her daughter leaving.

According to her father, she is still a bit traumatized and speaks only Persian. Richard says the first place she wanted to go to was the toy store.

Nazanin Zaghari-Ratcliffe was arrested by the IRGC agents in March of 2016 at Imam Khomeini airport in Tehran as she was returning to Britain with her daughter. She was charged with espionage.

Richard Ratcliffe says Nazanin’s interrogators have told her that she will not be released “anytime soon.” He has asked to meet with Prime Minister Boris Johnson one more time in order to urge him to help release Nazanin from prison.

British MP Tulip Siddiq said: “It is heartwarming to see Gabriella reunited with her father after 1300 days, but it is painful that she has been separated from her mother. Iran must end its hostage diplomacy.”

City officials in Iran's capital Tehran are planning to put locks on large waste containers in the streets to prevent garbage pickers from accessing waste. END_OF_DOCUMENT_TOKEN_TO_BE_REPLACED

The Biden Administration has confirmed to the US Congress that sanction imposed by its predecessor on Iran have drastically reduced Iran's trade with the world. END_OF_DOCUMENT_TOKEN_TO_BE_REPLACED

The UK government said on Sept 20 that Britain would "not rest" until all its dual nationals being held in Iran were returned home. END_OF_DOCUMENT_TOKEN_TO_BE_REPLACED