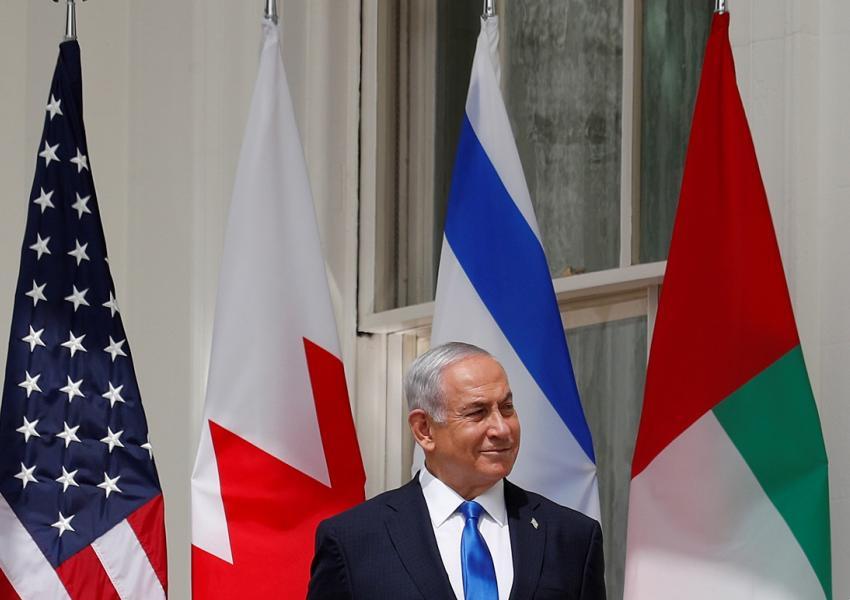 Netanyahu: We Must All Stand Up To Iran

In his address to the virtual UN General Assembly, Israeli Prime Minister Benjamin Netanyahu emphasized the importance of “standing up to Iran” and praised President Trump for “forcing countries to choose between doing business with America or doing business with Iran, and for taking out out “the world’s most dangerous terrorist,” Qassem Suleimani.

In his message to the UN, Netanyahu stated that there is no question Iran is seeking nuclear weapons, and claimed that rather than curbing Iran’s aggression, “the nuclear deal fed and funded it”.

Netanyahu also criticized the Security Council for its “appeasement” of Iran despite Iran’s “brazen violations” of the terms of the nuclear deal that were presented in the documents that Israel provided: “In the run-up to the nuclear deal, Israel was told—especially by our European friends—that any Iranian violation would be met with a quick and severe response. In the face of the irrefutable evidence of the nuclear archive, the Security Council has done, well, absolutely nothing.”

The Israeli prime minister also revealed the location of a Hezbollah secret “missile factory” and an arms depot in Beirut “meters away from a gas company”.

Report from Beirut indicates Hezbollah quickly organized a media tour to the locations pinpointed by Netanyahu in an attempt to prove the opposite.

The alleged precision missile factory is "a few meters away from a gas station" on one side, and 50 meters (164 feet) from a "gas company" on the other.

"If this thing explodes, it’s another tragedy," Netanyahu said.

The site is also close to Beirut's international airport.

The Israeli images appeared to show cooking gas depots, but there are also petrol stations nearby according to Google Maps.

Netanyahu showed details of two other alleged missile production sites, in Beirut's Laylaki and Choueifat districts, which he said were located under apartment buildings.

“I say to the people of Lebanon, Israel means you no harm, but Iran does; Iran and Hezbollah have deliberately put you and your families in grave danger,” Netanyahu continued.

“Iran has been working on a new generation of centrifuges, it’s called the IR9, which will multiply Iran’s enrichment capability fifty-fold,” he added. “We who live in the Middle East are suffering the consequences of that irresponsible deal. A richer and emboldened Iran used the billions that flowed into its coffers to fuel its campaign of carnage and conquest across the region.”

With reporting by AFP

City officials in Iran's capital Tehran are planning to put locks on large waste containers in the streets to prevent garbage pickers from accessing waste. END_OF_DOCUMENT_TOKEN_TO_BE_REPLACED

The Biden Administration has confirmed to the US Congress that sanction imposed by its predecessor on Iran have drastically reduced Iran's trade with the world. END_OF_DOCUMENT_TOKEN_TO_BE_REPLACED

The UK government said on Sept 20 that Britain would "not rest" until all its dual nationals being held in Iran were returned home. END_OF_DOCUMENT_TOKEN_TO_BE_REPLACED