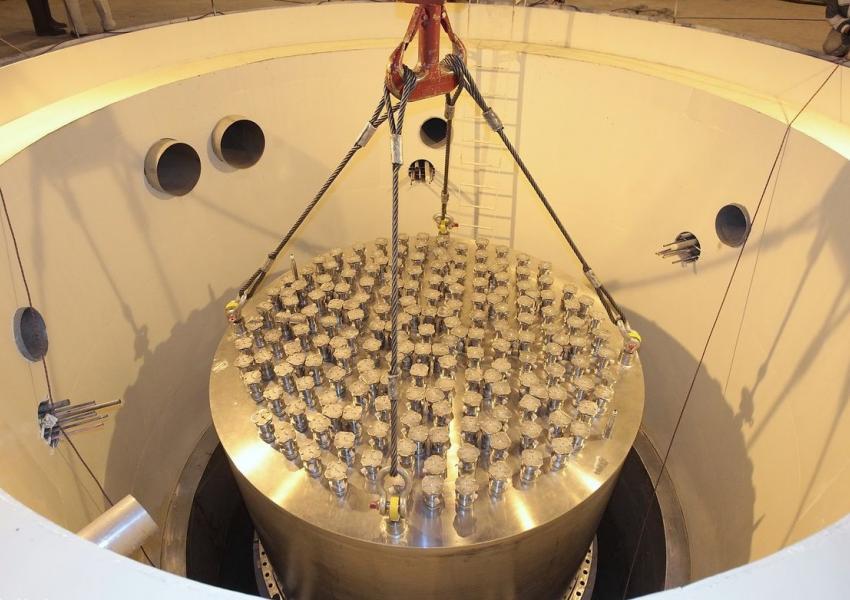 Mohammad Eslami, head of the Atomic Energy Organization of Iran (AEOI), said Thursday that the 40-megawatt IR-40 heavy water nuclear reactor at Arak, which was to be redesigned under the 2015 nuclear accord to minimize use of plutonium, should be made operational "as soon as possible."

Iran said in March it would cold test the redesigned IR-40, a natural uranium reactor that uses heavy water as moderator and coolant, to prepare for full commissioning later this year. The 2015 deal − the JCPOA, Joint Comprehensive Plan of Action − required the reactor’s redesign, with outside assistance, to preclude significant production of plutonium, a possible component of a nuclear weapon.

Iran since 2019 has been breaking various terms of the JCPOA, which the United States left in 2018 while imposing ‘maximum pressure’ sanctions. Iran has always insisted that the IR-40 is useful for conducting research and development and producing medical and industrial isotopes such as those used in agriculture. Under the JCPOA, spent fuel was to be shipped out of Iran.

Speaking during a visit to the reactor, 250 km (155 miles) south-west of Tehran, Eslami set no date for relaunching a redesigned reactor but said quality was important to be able to "compete with international brands" of medical and industrial isotopes.

Eslami's remarks came a few days after Iran reached a temporary agreement with the International Atomic Energy Agency (IAEA) allowing the nuclear watchdog's cameras, other than additional ones installed under the JCPOA, to continue running in Iran’s nuclear sites.

Some analysts interpret this arrangement as a sign that the new government of President Ebrahim Raisi (Raeesi) will soon return to talks in Vienna with world powers − the remaining JCPOA signatories and indirectly the US − on reviving the JCPOA. The talks have been in abeyance since June pending the transition in Tehran.

Reactors similar to Arak are used by Israel, India and Pakistan to produce plutonium for nuclear weapons – all outside IAEA monitoring, which Iran undergoes as a signatory of the Nuclear Non-Proliferation Treaty (NPT). Hossein Shariatmadari, editor of the flagship principlist newspaper Kayhan and long-time opponent of nuclear talks, in a commentary Wednesday repeated his call for Iran to leave the NPT, which guarantees signatories help in developing a civil nuclear program.

In 2019, after the US left the JCPOA, Iran said Washington’s withdrawal had slowed down redesign of the Arak reactor which was being carried out by China. Ali Akbar Salehi, then AEOI head, in January 2019 said Iran had purchased spares pressure tubes to replace the core so Iran could reconstitute the reactor if the JCPOA fell apart.

Salehi claimed no-one knew about buying the spares except Supreme Leader Ali Khamenei, who had already warned nuclear negotiators not to trust that world powers would respect the JCPOA. "Not only we did not destroy the bridges behind us, but we even made new bridges so that we could quickly revert to the previous position, if necessary," Salehi said in an interview with state broadcaster IRIB.

Iran's president Ebrahim Raisi addressed the UN General Assembly saying his country wants a resumption of nuclear talks with world powers to lead to the removal of US sanctions. END_OF_DOCUMENT_TOKEN_TO_BE_REPLACED

President Joe Biden told the UN General Assembly on September 21 that he will prevent Iran from getting nuclear weapons. END_OF_DOCUMENT_TOKEN_TO_BE_REPLACED

India has seized nearly three tons or $2.72 billion worth of Afghan heorin shipped from Iran. END_OF_DOCUMENT_TOKEN_TO_BE_REPLACED

Iran's foreign ministry spokesman has said that nuclear talks with world powers will start in a few weeks but has not given a firm date. END_OF_DOCUMENT_TOKEN_TO_BE_REPLACED