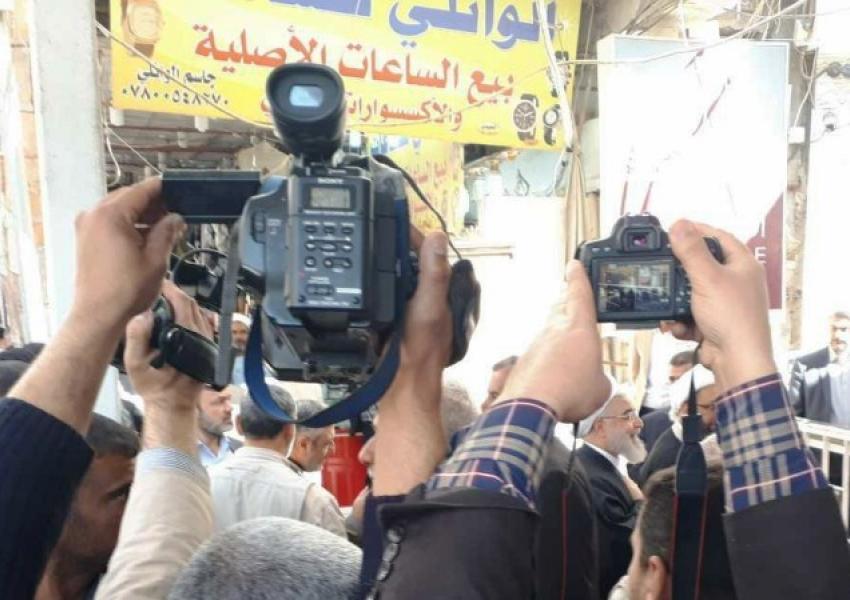 President Hassan Rouhani met with Ayatollah Sistani in his house in Najaf on Wednesday, March 13.

Rouhani is the second high-ranking official of the Islamic Republic to meet with the prominent Iraqi cleric, the first being Hashemi Rafsanjani.

Ayatollah Sistani, who is of Iranian background, had previously refused to meet with Iran’s former president Mahmoud Ahmadinejad.

Today is the third day of Rouhani’s three-day trip to Iraq.

Rouhani’s goal in his trip is to increase trades and cooperation with Iran’s neighbor despite U.S sanctions. It is yet unclear how much Iraq is willing to tolerate American pressures in its dealings with Iran.

On the first day of his trip, Rouhani met with his Iraqi counterpart Barham Salih, Prime Minister Adil Abdul-Mahdi, and speaker of the parliament Mohamed al-Halbousi.

After the meeting with Salih, Rouhani told the reporters that he did not find any disagreements. He added that “Iraq’s stability, security, and democracy” are very important for the Islamic Republic of Iran.

Iran and Iraq were in a bloody war for eight years from 1980 to 1988, with the unofficial death toll of over 2 million. After the fall of Saddam Hossein and the rise of Shias to power in Iraq, the relations between the two countries has improved significantly.

The president of Iraq told the reporters that he hopes “Iraq’s neighbors understand the importance of stability” in his country.

Rouhani hopes to increase the electricity and natural gas export to Iraq.

City officials in Iran's capital Tehran are planning to put locks on large waste containers in the streets to prevent garbage pickers from accessing waste. END_OF_DOCUMENT_TOKEN_TO_BE_REPLACED

The Biden Administration has confirmed to the US Congress that sanction imposed by its predecessor on Iran have drastically reduced Iran's trade with the world. END_OF_DOCUMENT_TOKEN_TO_BE_REPLACED

The UK government said on Sept 20 that Britain would "not rest" until all its dual nationals being held in Iran were returned home. END_OF_DOCUMENT_TOKEN_TO_BE_REPLACED