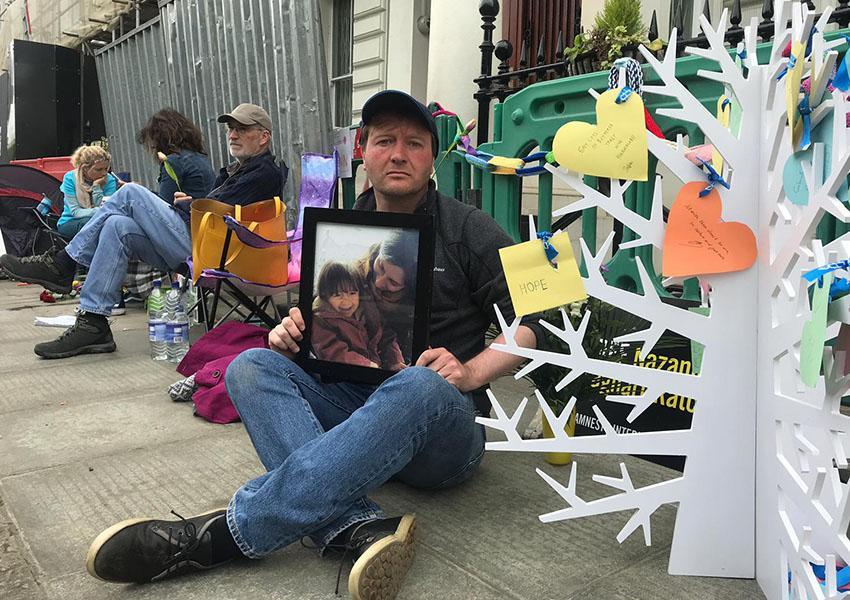 Richard Ratcliffe: Nazanin is a diplomatic hostage of Islamic Republic

The husband of Nazanin Zaghari-Ratcliffe, the British-Iranian woman incarcerated in Iran for three years, continues his hunger strike outside the Iranian embassy in London for the sixth day in solidarity with his wife, who is also on hunger strike in prison.

On Saturday, Richard Ratcliffe and Nazanin both went on Hunger strike on the fifth birthday of their daughter who has not been with her mother in 3 years. Richard’s mother and friends have also joined him outside the Iranian embassy in tents.

Boris Johnson, the former foreign minister of Britain and a candidate for the prime minister position was attacked by some in the media, including Richard Ratcliffe for saying during a debate that she was teaching journalism in Iran, while her family had repeatedly said that she was spending holidays in Iran.

Boris Johnson in response said that his comments “didn’t make any difference” and that “ if you point your finger at Britain, you are exonerating the Islamic Revolutionary Guard Corps who is the real culprit in this case.”

The other issue which casts a shadow on this case is the British government’s debt to the Iranian regime over the sale of weapons that were paid for by the previous regime of Iran before the revolution.

Ten years ago, the international court of justice ruled that Britain must pay Iran the 400 million pound, but the EU sanctions at the time did not allow it to happen.

Richard Ratcliffe says his wife is the victim of “diplomatic hostage taking” by the Islamic Republic officials over Britain’s debt, and to force Britain to support the nuclear deal.

Ratcliffe and his friends and family say their goal is the “immediate and unconditional release of Nazanin from prison”.

A group of British members of parliament visited Richard outside the Iranian embassy and expressed their solidarity with his campaign to release Nazanin.

City officials in Iran's capital Tehran are planning to put locks on large waste containers in the streets to prevent garbage pickers from accessing waste. END_OF_DOCUMENT_TOKEN_TO_BE_REPLACED

The Biden Administration has confirmed to the US Congress that sanction imposed by its predecessor on Iran have drastically reduced Iran's trade with the world. END_OF_DOCUMENT_TOKEN_TO_BE_REPLACED

The UK government said on Sept 20 that Britain would "not rest" until all its dual nationals being held in Iran were returned home. END_OF_DOCUMENT_TOKEN_TO_BE_REPLACED