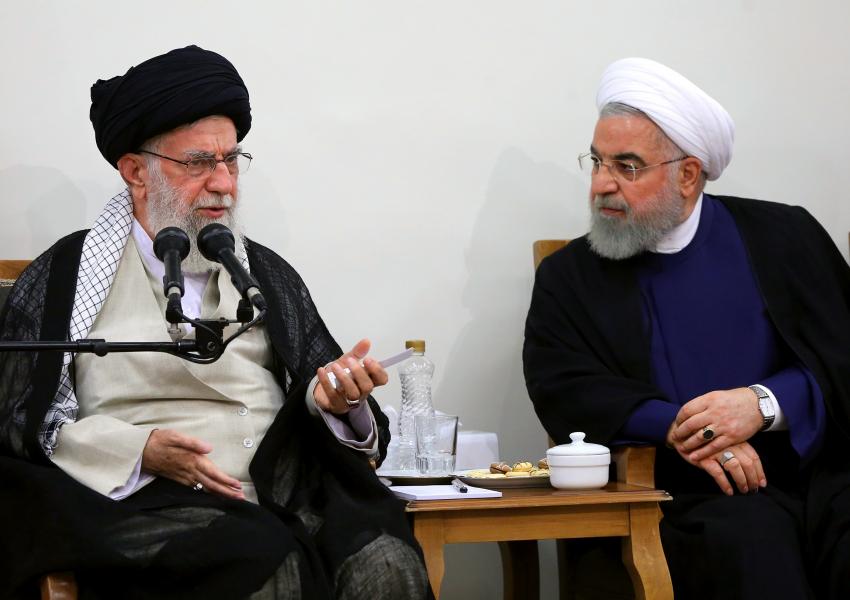 President Hassan Rouhani Wednesday said that decisions over Iran’s nuclear program and talks in Vienna were made or endorsed by Supreme Leader Ali Khamenei. He was responding to attacks on the government over Vienna talks with world powers aimed at reviving Iran’s 2015 nuclear deal with world powers, the JCPOA (Joint Comprehensive Plan of Action).

Two champions of the atomic program who have registered for the June 18 presidential election, former president Mahmoud Ahmadinejad and former top security official Saeed Jalili, have both attacked the talks.

Speaking at a televised cabinet meeting, Rouhani said the government had received both written and oral instructions from Khamenei over the negotiations, which have been in progress since April 6. The president cited a particular instruction he had received “a few weeks ago” and passed to Iran’s negotiators.

“I promise the people of Iran that the Vienna talks will end with Iranian nation’s victory, and very big steps have been taken in this regard," Rouhani said. He pointed out that during Ahmadinejad's presidency, from 2009 to 2013, and when Jalili led nuclear negotiations with Europe between 2007 and 2013, negotiators had returned from every meeting "with a [United Nations] resolution against the country."

The first UN Security Council resolution on Iran’s nuclear program, 1737, was passed in 2006, and followed by others, which included imposing sanctions that were lifted only when the Rouhani government negotiated the JCPOA.

Ahmadinejad and Jalili have both recently attacked the Vienna talks. "Who has allowed you to negotiate?" Ahmadinejad said April 18 in a meeting with supporters from Yazd province. "Why should those whose inability to negotiate has been proven, and who will be deceived, go to negotiate on behalf of the Iranian people," he said. Ahmadinejad charged that Rouhani, who he said was supported by only 2 percent of Iranians, would make commitments for which all would pay the price.

"This is not negotiation,” he charged. “It's all about what other things they are going to surrender [to world powers].” Ahmadinejad drew parallels with the loss of "half of Iran" to Russia during the rule of Qajar king Fath-Ali Shah in the 18th century.

Jalili on May 8 in a video accused the Rouhani government of having no solutions over the nuclear issue or the sanctions United States President Donald Trump imposed on Iran after withdrawing from the JCPOA in 2018. "You can't put the country in limbo to negotiate with a few world powers and [surrender to their] will," Jalili said.

Expressing optimism ahead of Wednesday’s meeting of the JCPOA Joint Commission in Vienna, Iran's top negotiator and deputy foreign minister Abbas Araghchi told the media that good progress has been made in the four rounds of talks: "There are some key issues that need further discussion and decision-making in the capitals, which we hope will take place in the next few days and we [will] reach a conclusion in the next round of talks."

decision on extension of the three-month interim deal is going to be made in Tehran to allow the talks in Vienna to continue until a final agreement is reached.

City officials in Iran's capital Tehran are planning to put locks on large waste containers in the streets to prevent garbage pickers from accessing waste. END_OF_DOCUMENT_TOKEN_TO_BE_REPLACED

The Biden Administration has confirmed to the US Congress that sanction imposed by its predecessor on Iran have drastically reduced Iran's trade with the world. END_OF_DOCUMENT_TOKEN_TO_BE_REPLACED

The UK government said on Sept 20 that Britain would "not rest" until all its dual nationals being held in Iran were returned home. END_OF_DOCUMENT_TOKEN_TO_BE_REPLACED