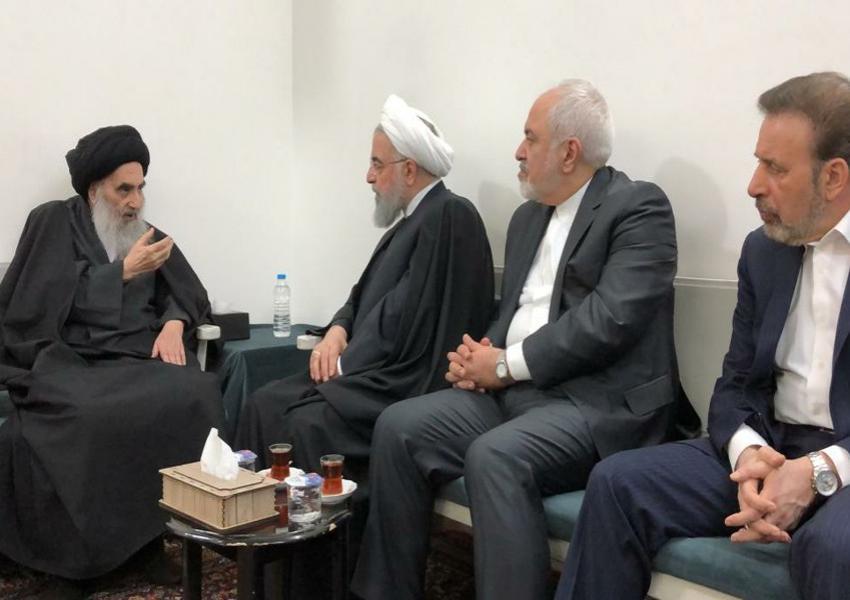 Rouhani Meets with Ayatollah Sistani: The Message for Iranians

Iran’s president, Hasan Rouhani, met with Ayatollah Sistani in the final day of his trip to Iraq. Ayatollah Sistani is one of the most powerful and influential Iranian Shia Marja (high ranking clerics) in Iraq and the head of many of the seminaries in Najaf. This is the first time Sistani accepts an Iranian president.

Ayatollah Sistani has had a relatively good relationship with so-called reformists in Iran. He previously had accepted Hashemi Rafsanjani. The current foreign minister, Javad Zarif, has been able to meet the Ayatollah a few times. However, the previous president, Mahmood Ahmadinejad, failed to be admitted by the Ayatollah both times he visited Iraq. The former Chairman of the Expediency Discernment Council, Hashemi Shahroudi, who traveled to Iraq last year as the official representative for the Supreme Leader, did not manage to get admission although he stayed in Najaf for five days.

Sistani enjoys a great spiritual influence among Shias in Iran and Iraq. He leverages this influence to convey his messages.

His meeting with Rouhani and Zarif, while his denial of requests by Ahmadinejad and Shahroudi, sends a clear message to the Iranian people, that is he is against the hard-line faction of power in the Iranian system and backs the moderates in the Islamic Republic. He asserted this point explicitly in his talk with Rouhani. His office’s statement regarding this meeting insists that he talked about the necessity of moving toward moderate policies in the sensitive Middle East.

Sistani’s stances on different matters have been moderate and forethoughtful. For example, he has never attacked the Sunni kingdom of Saudi, or for that matter, he always urged Iraqi statesmen to strengthen their relations with the Saudis. He has encouraged the Shias of the region to respect the laws of their countries. He has always paid respect to Sunnis and condemned any disrespect to their beliefs.

Sistani’s encouragement of Iran-Iraq relationships sends a clear signal to the Americans: he is not supporting the economic sanctions on Iran. He is well respected in the policy-making institutions in the US. Paul Bremer, the head of the temporary Coalition Provisional Authority in Iraq, pointed out and praised Sistani’s constructive role in the new democratic system of Iraq. The temporary authority, despite the prior plans for Iraq, accepted Sistani’s request to hold general elections and hand over the power to the Iraqis’ representatives.

Sistani expressed his discontent for the first time about Iran’s meddling in Iraq’s internal politics. He told Rouhani that he is happy about the closer ties between two countries, but this must be based on interests of both sides and mutual respect, and it must not pave the way for interference in other countries internal politics. He is implying that he is against Iran’s policies toward Iraq, Syria, and Lebanon. The more limited this type of policies become, the more the Iranian regime can focus on improving the conditions of living in Iran.

Sistani has shown serious concern in the human condition in the region and no care for the dominance of ideology, religion or a political will. This approach is in stark contrast with the revolutionary ideology of Iran’s Ayatollah Khomeini and Ayatollah Khamenei.

In practical terms, Sistani has backed the secular democratic system in Iraq, which is the antithesis of the theocracy of the Islamic Republic of Iran. However, he deals with the Iranian regime as a de facto reality which one needs to harness through engagement. He takes the same approach to deal with other undemocratic regimes in the region.

Sistani’s cooperative approach, although being long-term and in need of patience, is a pragmatic solution which brings most benefits with the least costs. Other approaches have proven to bring about destruction and chaos for the region.

City officials in Iran's capital Tehran are planning to put locks on large waste containers in the streets to prevent garbage pickers from accessing waste. END_OF_DOCUMENT_TOKEN_TO_BE_REPLACED

The Biden Administration has confirmed to the US Congress that sanction imposed by its predecessor on Iran have drastically reduced Iran's trade with the world. END_OF_DOCUMENT_TOKEN_TO_BE_REPLACED

The UK government said on Sept 20 that Britain would "not rest" until all its dual nationals being held in Iran were returned home. END_OF_DOCUMENT_TOKEN_TO_BE_REPLACED