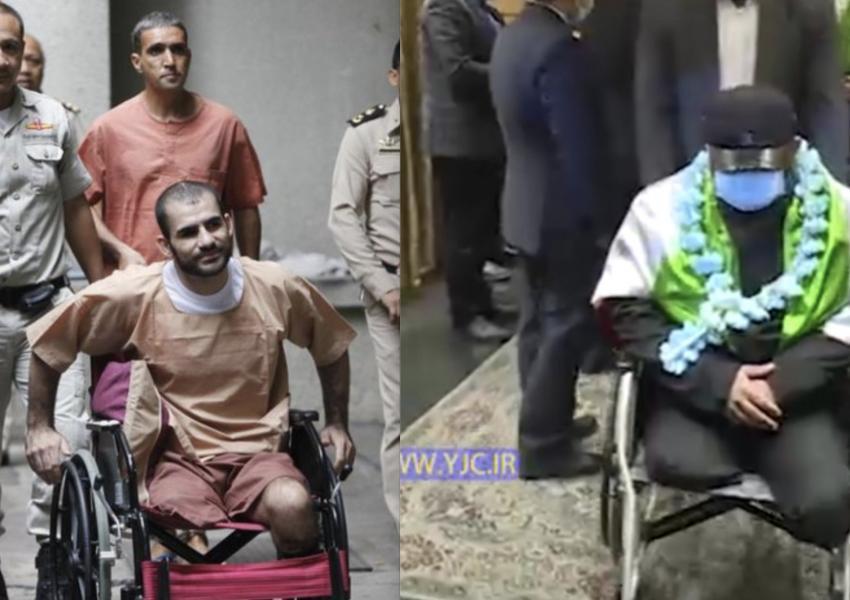 Thai officials confirmed that the three Iranian prisoners exchanged with the Australian-British prisoner in Iran were involved in a plot to assassinate an Israeli diplomat in 2012.

The three were exchanged with Kylie Moore Gilbert, the Australian-British academician imprisoned in Iran.

Deputy Attorney General of Thailand told the Associated Press that this prisoner exchange was done based on an agreement between Iran and it is not unusual.

The individuals identified as Saeed Moradi, Mohammad Khazaei, and Masoud Sedaghatzadeh, were convicted in court for attempting to bomb the vehicle of an Israeli diplomat in Thailand’s capital, Bangkok.

Saeed Moradi, one of the convicts, attempted to throw explosives at the police while escaping and lost both his legs. Images published of him in Iranian media show him in a wheelchair.

The southern criminal court of Bangkok sentenced Moradi to life in prison for terrorism and sentenced Khazaei to 15 years in prison.

Sedaghatzadeh, the third exchanged prisoner, was arrested in Malaysia for his ties to the terror plot of the Israeli diplomat. He was extradited to Thailand in 2017.

On Wednesday, the Young Journalists Club (YJC), a news agency affiliated to Iran’s state-run television (IRIB) announced that Kylie Moore-Gilbert has been exchanged with three Iranians in prison abroad.

A video clip on the YJC website showed Moore-Gilbert anxiously waiting with two other women while three men draped in Iranian flags, including one in a wheelchair, were escorted into the room. The video had no commentary and the men were described only as “one businessperson and two Iranian citizens” imprisoned “on bogus charges abroad.”

Kylie Moore-Gilbert is a professor of Islamic Studies at Melbourne University in Australia and was arrested in Iran in the fall of 2018. She has been sentenced to ten years in prison for espionage. She is an Australian-British national.

She was moved in August to Qarchak Prison, east of Tehran, but the Iranian Association of Human Rights Activists reported she was moved to an unknown location in October. In her letters to the Guardian newspaper, Kylie emphasized that she was arrested after rejecting the offer to spy for the Islamic Republic.

She later went on a hunger strike along with Fariba Adelkhah, an Iranian-French researcher who was arrested by the Islamic Revolutionary Guard Corps in the Spring of 2019 on similar charges.

City officials in Iran's capital Tehran are planning to put locks on large waste containers in the streets to prevent garbage pickers from accessing waste. END_OF_DOCUMENT_TOKEN_TO_BE_REPLACED

The Biden Administration has confirmed to the US Congress that sanction imposed by its predecessor on Iran have drastically reduced Iran's trade with the world. END_OF_DOCUMENT_TOKEN_TO_BE_REPLACED

The UK government said on Sept 20 that Britain would "not rest" until all its dual nationals being held in Iran were returned home. END_OF_DOCUMENT_TOKEN_TO_BE_REPLACED