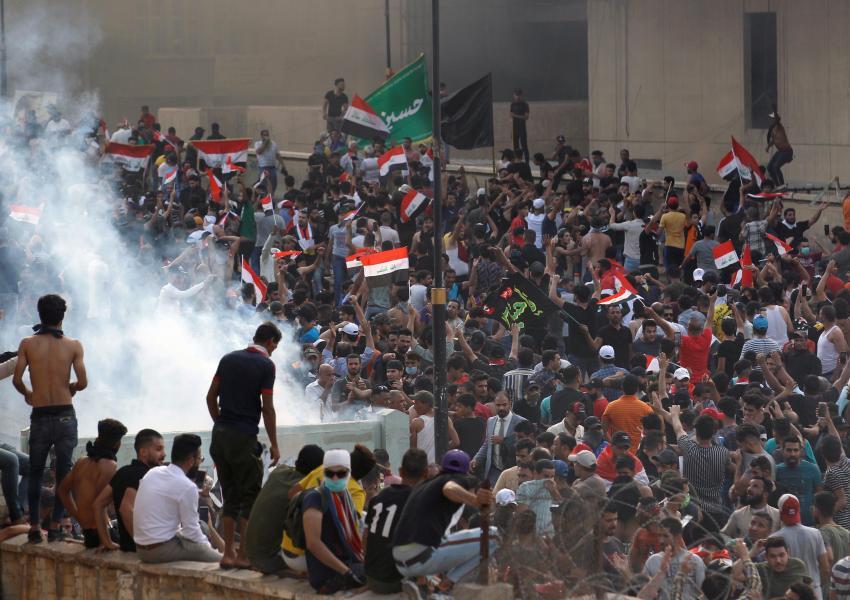 The Times of London reported that the United Nations has accused the government of Iraq of creating an atmosphere of terror and violent crackdown on protesters and using live rounds by the order of Iran.

It is said that the Iran-backed militias are operating within the police and security forces of Iraq without insignia, and they have been trying to shut down the protests in recent weeks.

On Sunday, the anti-riot police attacked the protesters on Tahrir square to clear the bridges they controlled. According to medical volunteers, since the beginning of the protests, at least 300 people have lost their lives.

Other cities in Iraq also witnessed similar protests on Sunday which led to 12 deaths.

As the shootings at the protesters increase by the hands of unidentified forces and groups tied to security forces, the Islamic Republic of Iran is also taking a harsh stance on Iraq’s developments.

Ayatollah Ali Khamenei, the leader of the Islamic Republic of Iran has directly blamed the United States, Israel, and Western intelligence agencies for the protests in Iraq and Lebanon. Qasem Soleimani, the commander of the Quds Force, which is the international operations wing of the Islamic Revolutionary Guard Corps (IRGC) and in charge of Iran’s proxy militia groups, was sent to Iraq by Khamenei to stop the ousting of Prime Minister Abdul-Mahdi.

Based on the reports, Soleimani has presided over the security meetings in Iraq and has talked with the political and religious leaders. He has been quoted bragging to Iraqi security officials about suppressing the protests in Iran.

Prime Minister Adel Abdul-Mahdi had promised to resign earlier until Soleimani arrived with the orders for the Iraqi officials.

The Iraqi protesters demand the government to be replaced with a government of experts who have no ties to the Iran-backed militia.

City officials in Iran's capital Tehran are planning to put locks on large waste containers in the streets to prevent garbage pickers from accessing waste. END_OF_DOCUMENT_TOKEN_TO_BE_REPLACED

The Biden Administration has confirmed to the US Congress that sanction imposed by its predecessor on Iran have drastically reduced Iran's trade with the world. END_OF_DOCUMENT_TOKEN_TO_BE_REPLACED

The UK government said on Sept 20 that Britain would "not rest" until all its dual nationals being held in Iran were returned home. END_OF_DOCUMENT_TOKEN_TO_BE_REPLACED