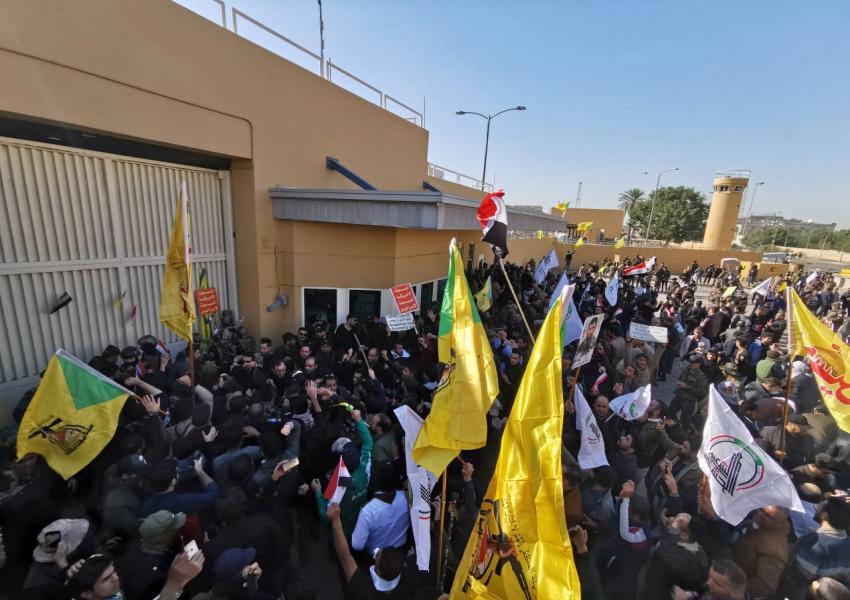 Trump: Iran is orchestrating the attack on U.S embassy in Iraq

In a recent tweet, U.S President Donald Trump wrote: “Iran killed an American contractor, wounding many. We strongly responded, and always will. Now Iran is orchestrating an attack on the U.S. Embassy in Iraq. They will be held fully responsible. In addition, we expect Iraq to use its forces to protect the Embassy, and so notified!”

The Iran-backed Hashd Al-Shaabi militia and its supporters attacked the U.S embassy in Baghdad in response to the recent U.S attack against Kata’ib Hezbollah, another Shia Iran-backed militia group in Iraq. Reports indicate that parts of the embassy were set on fire by these forces.

Alarm and shooting were heard from inside the embassy. The Iran-backed forces burnt American flags and destroyed U.S embassy cameras while chanting “Death to America”.

They were carrying banners that said “the parliament should force American forces out of Iraq otherwise we will kick them out,” they also demanded the U.S embassy in Iraq to be shut down.

Several Iraqi officials have condemned the U.S attack. The prime minister of Iraq also stated that “this attack is unacceptable and could have dangerous consequences”.

However, Ayatollah Sistani, the most influential Shia cleric in Iraq, while condemning the attack stated that only Iraqi officials can respond to the U.S attack.

City officials in Iran's capital Tehran are planning to put locks on large waste containers in the streets to prevent garbage pickers from accessing waste. END_OF_DOCUMENT_TOKEN_TO_BE_REPLACED

The Biden Administration has confirmed to the US Congress that sanction imposed by its predecessor on Iran have drastically reduced Iran's trade with the world. END_OF_DOCUMENT_TOKEN_TO_BE_REPLACED

The UK government said on Sept 20 that Britain would "not rest" until all its dual nationals being held in Iran were returned home. END_OF_DOCUMENT_TOKEN_TO_BE_REPLACED