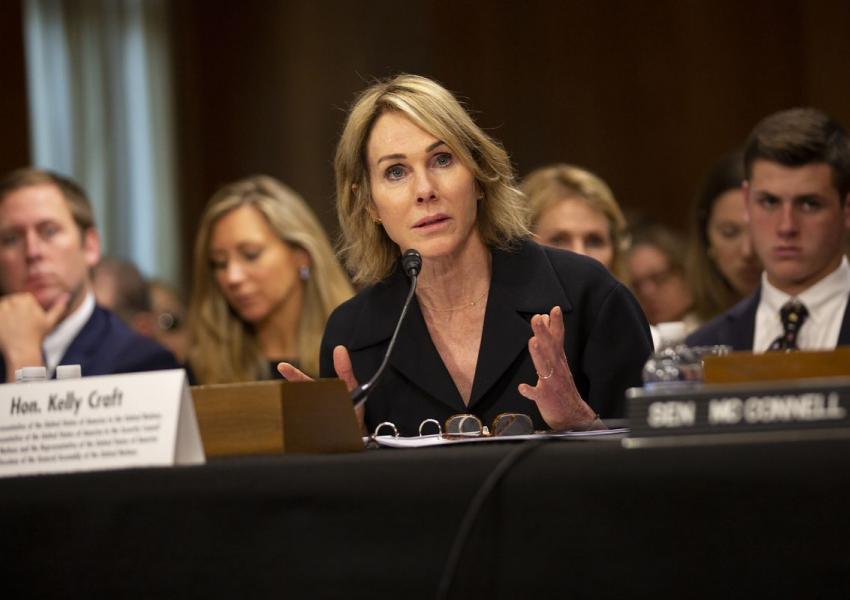 US Ambassador To UN: We Will Continue To Hold Iran Accountable, Even Alone

At a UN Security Council debate on a comprehensive review of the situation in the Persian Gulf region, US ambassador Kelly Craft said the United States recognizes that Iran is the single greatest threat to peace and security in the Middle East.

While mentioning the success of the US in convincing some Arab countries and Israel to sign peace agreements, Craft said: We know that when nations stand together and confront Iran, the world is a safer place.

“Today, we are confronting the full range of Iran’s destabilizing activities, from its support of terrorist groups and proxies, to its development of ballistic missiles in defiance of the Security Council,” she continued.

Rejecting the Russian Foreign Minister Sergei Lavrov’s proposal to create a Persian Gulf Security construct to promote stability in the region, Craft said: Respectfully, I think the solution is much easier: this Council must simply muster the courage to hold Iran accountable to its existing international obligations. And it is a fact that Iran is neither abiding by the letter nor spirit of this Council’s decisions.

She went on to list some of Iran’s destabilizing and destructive activities in the Middle Eastern countries:

“Instead of supporting peace efforts to end the conflict in Yemen, Iran has continually sent the Houthis weapons to fuel the war, in violation of the arms embargo in Resolution 2216… In Syria, the Assad regime continues to give Iran and its military proxies safe harbor to extend their terror campaign and project its military power deeper into the Middle East, threatening the lives of the Syrian people, but also the security of Israel… In Lebanon, Iran continues to arm Hizballah in blatant violation of Resolutions 1701 and 1559, most notably the arms embargo that this Council reaffirmed less than two months ago… In Iraq, Iran continues to support local militias, in violation of Iraq’s sovereignty and Resolution 2522.”

Ambassador Craft once again criticized the UN Security Council for ignoring Iran’s violations of UN resolutions, saying: “Month after month, some here today turn a blind eye as Iran channels sophisticated weapons and money into Lebanon, ensuring there can never be peace. This Council must do more to address both the incomplete implementation of Resolutions 1559 and 1701, and Hizballah’s illicit activities.”

“As long as Iran and others support the terrorist activities of Hamas and Islamic Jihad, our sincere efforts to help Israelis and Palestinians reach peace and build a better future together will be threatened by terror and mired in meaningless and perpetual violence and conflict,” she added. “These are the facts. If we intend for this to be a meaningful and constructive conversation about insecurity in the region, then we must openly acknowledge the main driver of its insecurity – Iran.”

In response to the recent criticism by Russia and China regarding US sanctions on Iran, in which they said the US must stop acting like the “World police”, Craft said: Foreign Minister Lavrov, I appreciate the focus Russia has placed today on Gulf security. But, respectfully, I disagree with the solution that you have proposed. The international community does not need yet another mechanism to promote Gulf security. The Security Council has all the tools at its disposal to hold Iran accountable; we must simply decide to do so.”

Craft once again promised that the United States will continue to hold Iran accountable, “even if it means we must act alone.”

City officials in Iran's capital Tehran are planning to put locks on large waste containers in the streets to prevent garbage pickers from accessing waste. END_OF_DOCUMENT_TOKEN_TO_BE_REPLACED

The Biden Administration has confirmed to the US Congress that sanction imposed by its predecessor on Iran have drastically reduced Iran's trade with the world. END_OF_DOCUMENT_TOKEN_TO_BE_REPLACED

The UK government said on Sept 20 that Britain would "not rest" until all its dual nationals being held in Iran were returned home. END_OF_DOCUMENT_TOKEN_TO_BE_REPLACED