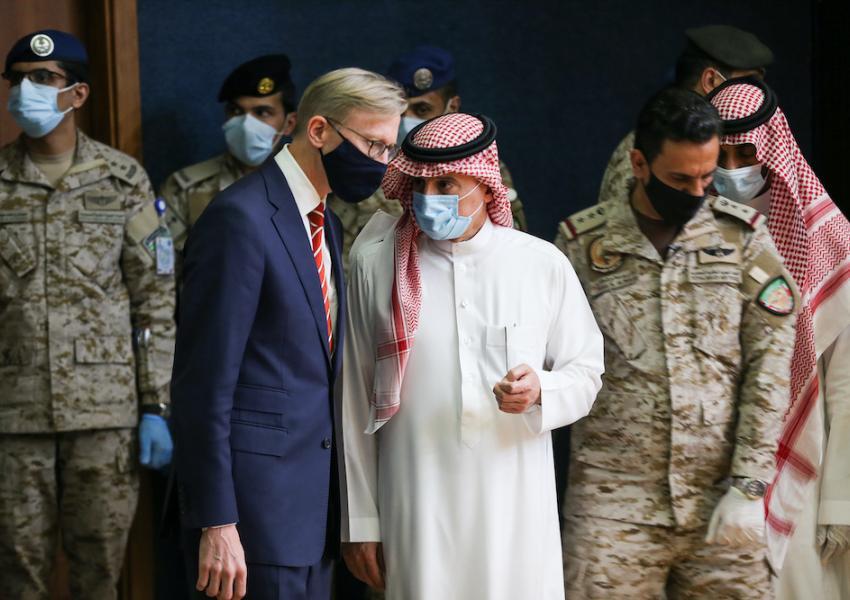 In a press conference on Monday in Riyadh, the Arab Coalition and the U.S Special Envoy on Iran, Brian Hook, revealed the new Iranian weapons and missiles found in Yemen that were used against Saudi Arabia.

Brian Hook and the Saudi Arabian Minister of State for Foreign Affairs, Adel Al-Jubeir, held a joint press conference after revealing and examining the weapons.

A UN report recently showed that missiles and drones used in attacks against Saudi Arabia were of Iranian origin, marking the first time that the organization’s Secretary-General has explicitly recognized Iran’s role in attacks on the Kingdom.

In the joint press conference, Hook stated: “Iranian leaders are rejecting diplomacy, fueling instability, and worsening the suffering of innocent Yemenis...Iran will never be allowed to develop a nuclear weapon."

“The weapons that we see here today … are all the evidence we need, that the arms embargo on Iran must not be lifted. If the embargo expires, Iran will be able to purchase and sell these weapons, as well as many other kinds of weapons without any restrictions at all,” Hook said.

The US has drafted a resolution asking UN Security Council to extend the current arms embargo on Iran which will expire on October 18, 2020.

City officials in Iran's capital Tehran are planning to put locks on large waste containers in the streets to prevent garbage pickers from accessing waste. END_OF_DOCUMENT_TOKEN_TO_BE_REPLACED

The Biden Administration has confirmed to the US Congress that sanction imposed by its predecessor on Iran have drastically reduced Iran's trade with the world. END_OF_DOCUMENT_TOKEN_TO_BE_REPLACED

The UK government said on Sept 20 that Britain would "not rest" until all its dual nationals being held in Iran were returned home. END_OF_DOCUMENT_TOKEN_TO_BE_REPLACED