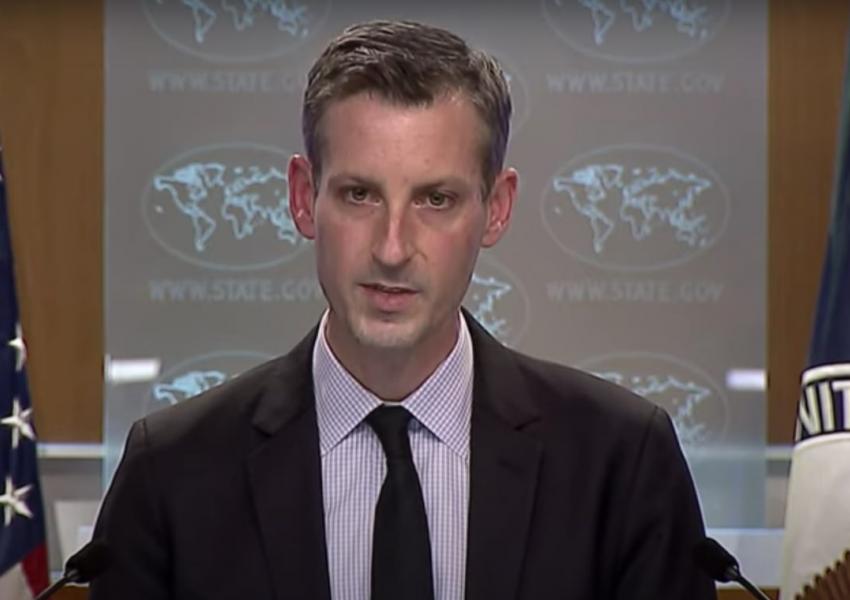 United States State Department spokesman Ned Price has said comments from the Iranian Intelligence Minister about Iran developing nuclear weapons if pressured are “very concerning,” but added that it was not clear whether Mahmoud Alavi was “speaking for anyone but himself.”

“Iran has an obligation under the Nuclear Non-proliferation Treaty, the NPT... permanent prohibition to acquire nuclear weapons, and it reaffirmed that commitment under the JCPOA,” Price added, referring to Iran’s 2015 nuclear deal with world powers, the Joint Comprehensive Plan of Action (JCPOA).

Iranian Intelligence Minister Mahmoud Alavi on Monday suggested Iran might develop nuclear weapons if “backed into a corner,” despite religious rulings from Iran’s Supreme Leader Ali Khamenei that nuclear and chemical weapons were incompatible with Islam.

“The Supreme Leader has declared that nuclear weapons are haram (religiously prohibited),” Alavi said. Alluding to the map of Iran – which roughly resembles a cat – the minister suggested that a peaceful cat, once “backed into a corner,” might behave differently.  “It won’t be Iran's fault anymore if they push it in that direction,” Alavi noted.

Alavi suggestion that the fatwa might change  is the second such declaration in recent weeks. Former Iranian diplomat and Revolutionary Guards brigadier-general Amir Mousavi in a January 30 interview with al-Mayadeen television said: “A fatwa is not permanent, according to Jaafari Shia jurisprudence. A fatwa is issued in accordance with developing circumstances. Therefore, I believe that if the Americans and Zionists act in a dangerous manner, the fatwa might be changed.”

Price said that the goal of the Biden administration was “to have Iran come back into full compliance with the JCPOA,” and then “to use the JCPOA, which we would seek to in the first instance lengthen and strengthen, as a platform for follow-on agreements to include other areas of Iran’s malign activities, and that includes, of course, its ballistic missile program.”

US “strategic orientation” toward Iran would not change, Price also said, due to the recent United Nations report on cooperation between Iran and North Korea over ballistic missiles. The report found that, in the final year of the Trump administration, Pyongyang had “developed its nuclear and ballistic missile programs, in violation of UN Security Council resolutions.”

Comments made by the Islamic Republic’s Minister of Intelligence highlight past discussions over the Iranian nuclear program in which both Iranian officials and Obama administration officials, who are now the core of the Biden administration, referred critics of the JCPOA to Khamenei’s fatwa. Many opponents of the deal said the fatwa was a hoax.

During nuclear negotiations in 2015, John Kerry, the US Secretary of State cited Khamenei’s fatwa several times, emphasizing its significance. President Hassan Rouhani and Foreign Minister Mohammad Javad Zarif referred to Khamenei’s fatwa as an assurance over the civil nature of Iran’s nuclear program.

Advocates of the JCPOA pointed out that the deal restricted Iran’s nuclear program and extended UN inspections of Iran’s atomic facilities. Experts estimated the deal reduced the ‘break out’ time – the period required to assemble enough fissile material for a crude bomb – to a year.

Once President Donald Trump in 2018 abandoned the deal as “the worst in history,” and other signatories largely left Iran to face draconian US sanctions, Iran began after 2019 to expand its nuclear program beyond the JCPOA limits, enriching uranium beyond 3.67 percent, using relatively advanced centrifuges and increasing the size of its fuel stockpile. The Iranian parliament has also passed legislation that would by later this month restrict the access of IAEA inspectors by not applying the Additional Protocol to the NPT, which Iran agreed in 2003.

The IAEA found Iran had concealed aspects of its nuclear program before 2003 – the IAEA chief Mohamed Elbaradei in November 2003 cited failures to declare materials and facilities – and has consistently called for intrusive inspections.

City officials in Iran's capital Tehran are planning to put locks on large waste containers in the streets to prevent garbage pickers from accessing waste. END_OF_DOCUMENT_TOKEN_TO_BE_REPLACED

The Biden Administration has confirmed to the US Congress that sanction imposed by its predecessor on Iran have drastically reduced Iran's trade with the world. END_OF_DOCUMENT_TOKEN_TO_BE_REPLACED

The UK government said on Sept 20 that Britain would "not rest" until all its dual nationals being held in Iran were returned home. END_OF_DOCUMENT_TOKEN_TO_BE_REPLACED