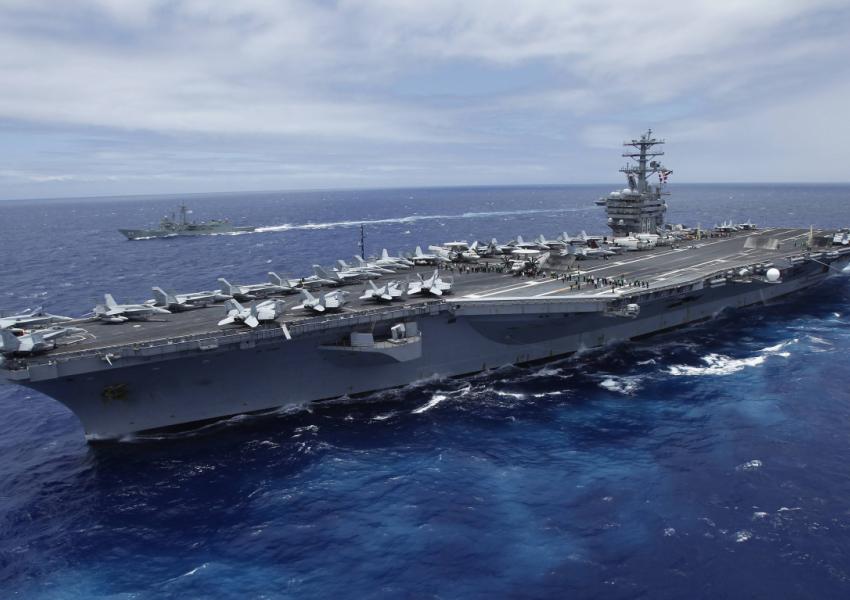 US Sending Mixed Signals By Withdrawing Nimitz From Persian Gulf

Conflicting signals and mixed messages are emerging from the Trump administration over its military posture in the Persian Gulf, top United States media outlets have reported.

The withdrawal of the aircraft carrier USS Nimitz – apparently en route to it home base in Washington State – followed a week in which the US deployed a Tomahawk-missile-armed submarine in the Gulf and sent B52 bombers within 60 miles of the Iranian coast.

Regional tension has been building in the run-up to the first anniversary on January 3 of a US drone strike in Baghdad that killed leading Iranian general Qasem Soleimani, alongside four other Iranians and five Iraqis, including a prominent militia leader. Many Iranian leaders, and Iraqis, have been talking of revenge.

Trump has fueled speculation since reportedly asking in November for military options against Iran. After a December 20 attack on the US embassy in Baghdad, Trump tweeted “"some friendly health advice to Iran” – “If one American is killed, I will hold Iran responsible. Think it over.”

The New York Times on Friday [January 1] quoted officials that redeploying the Nimitz, ordered by acting Defense Secretary Christopher Miller, was partly a “de-escalatory” signal to Tehran. “Senior Pentagon officials” told the Times that Miller wanted to remove what Iranian hardliners saw as a provocation justifying their threats against American military targets.

The Times reported Miller had over-ruled a request from General Kenneth McKenzie, the US regional commander, to keep in place the Nimitz and its attack aircraft. It was not clear, the paper claimed, whether Trump was aware of the order.

CNN has reported conflicting messages over Iran that the network said “could reflect divisions within the Pentagon.” CNN cited a senior defense official that the threat level from Iran was the highest since Soleimani’s death – with intelligence that Iran or allied Iraqi militias might be plotting attacks against US forces – while a second official argued there was “not a single piece of corroborating intel” that any attack was imminent.

With Trump due to leave office on January 20, the more lasting issue for incoming president Joe Biden may be Tehran’s notification on Friday to the International Atomic Energy Agency (IAEA) that it was about to resume enrichment to 20 percent, significantly more than allowed under Iran’s 2015 nuclear deal with world powers. This is the highest level Iran had reached by 2015 and will take place, Iran told the IAEA, at the fortified Fordow plant. Enrichment to 20 percent would bring Tehran far closer to a capacity to enrich to weapons grade.

Both Biden and Iranian President Hassan Rouhani have expressed a desire to revive the 2015 agreement, which Trump abandoned in 2018 before imposing draconian sanctions. Both Biden and Rouhani, who leaves office in June, face domestic opposition.

City officials in Iran's capital Tehran are planning to put locks on large waste containers in the streets to prevent garbage pickers from accessing waste. END_OF_DOCUMENT_TOKEN_TO_BE_REPLACED

The Biden Administration has confirmed to the US Congress that sanction imposed by its predecessor on Iran have drastically reduced Iran's trade with the world. END_OF_DOCUMENT_TOKEN_TO_BE_REPLACED

The UK government said on Sept 20 that Britain would "not rest" until all its dual nationals being held in Iran were returned home. END_OF_DOCUMENT_TOKEN_TO_BE_REPLACED