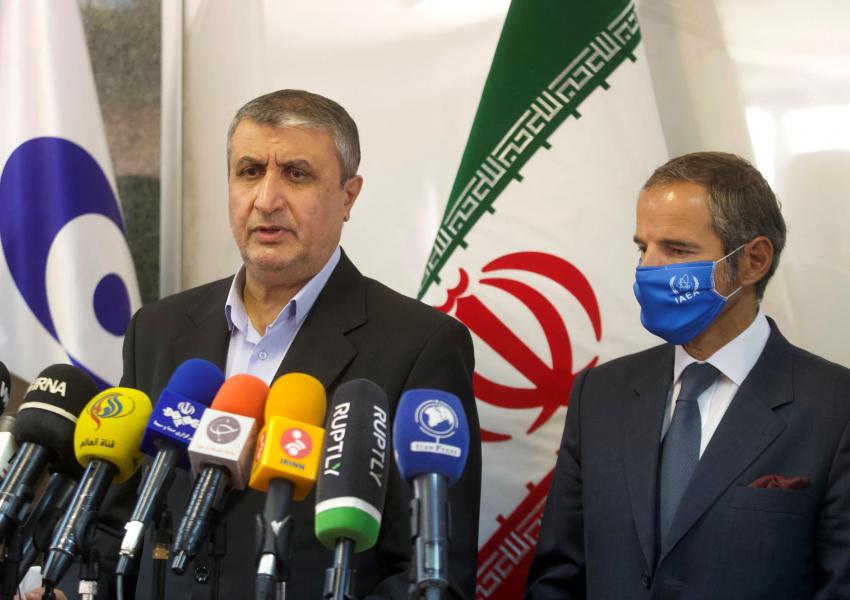 Iran’s foreign ministry on Monday reiterated that the visit of Rafael Grossi, head of the International Atomic Energy Agency (IAEA) a day earlier had been successful and constructive, while Iran maintained the same monitoring restrictions that it had put in place in February.

Many see Grossi’s Tehran visit as a win-win for both sides, but in fact one can argue that Iran gave little away while it made significant potential gains.

Grossi travelled to Tehran on Sunday and met the new head of the Atomic Energy Organization of Iran (AEOI), Mohammad Eslami, reaching a quick agreement that he said solved IAEA “most urgent” problem with Iran. Eslami is also one of President Ebrahim Raisi’s vice presidents.

In his weekly briefing, Saeed Khatibzadeh told reporters that the IAEA will not have access inspection access images taken by its monitoring cameras at Iran’s nuclear facilities, but Iran has agreed to allow the UN nuclear watchdog to change the memory cards and do necessary maintenance on the cameras.

In February Iran banned on site inspections by the IAEA permitted by the Additional Protocol, saying that it was allowing these inspections voluntarily. It also banned IAEA real-time access to its cameras in its nuclear facilities.

Grossi had said on Sunday that Eslami will travel to Vienna, and they would meet to continue discussions. But if Eslami visits Vienna, it could also be an opportunity for him to hold talks on the revival of the Joint Comprehensive Plan of Action (JCPOA).

Eslami is not a newcomer to Iran’s defense and nuclear programs. He has been on the international radar for some time. In 2008, Eslami was slapped with UN(link is external) and EU sanctions for having “engaged in, directly associated with or providing support for Iran’s proliferation sensitive nuclear activities or for the development of nuclear weapon delivery systems.” Under the Iran nuclear deal, Eslami’s EU sanctions are scheduled to be lifted by October 2023.

If Eslami travels to Vienna that could violate the EU sanctions, a point not mentioned by Grossi or by Khatibzadeh. If EU suspends the sanctions on Eslami, it would be a victory for Tehran, as it has been demanding sanctions on its senior officials to be lifted for reviving the JCPOA. Raisi’s new cabinet is stacked with numerous officials who are either under US or EU sanctions, including the president himself.

Seen in this light, Grossi’s trip to Tehran was a success for Iran. By giving little away it could potentially break the effectiveness of sanctions on its top officials. At the same time Tehran also averted a censure at the IAEA board meeting this week for lack of cooperation on information that could implicate for hiding sensitive information in the past.

Iran's president Ebrahim Raisi addressed the UN General Assembly saying his country wants a resumption of nuclear talks with world powers to lead to the removal of US sanctions. END_OF_DOCUMENT_TOKEN_TO_BE_REPLACED

President Joe Biden told the UN General Assembly on September 21 that he will prevent Iran from getting nuclear weapons. END_OF_DOCUMENT_TOKEN_TO_BE_REPLACED

India has seized nearly three tons or $2.72 billion worth of Afghan heorin shipped from Iran. END_OF_DOCUMENT_TOKEN_TO_BE_REPLACED

Iran's foreign ministry spokesman has said that nuclear talks with world powers will start in a few weeks but has not given a firm date. END_OF_DOCUMENT_TOKEN_TO_BE_REPLACED