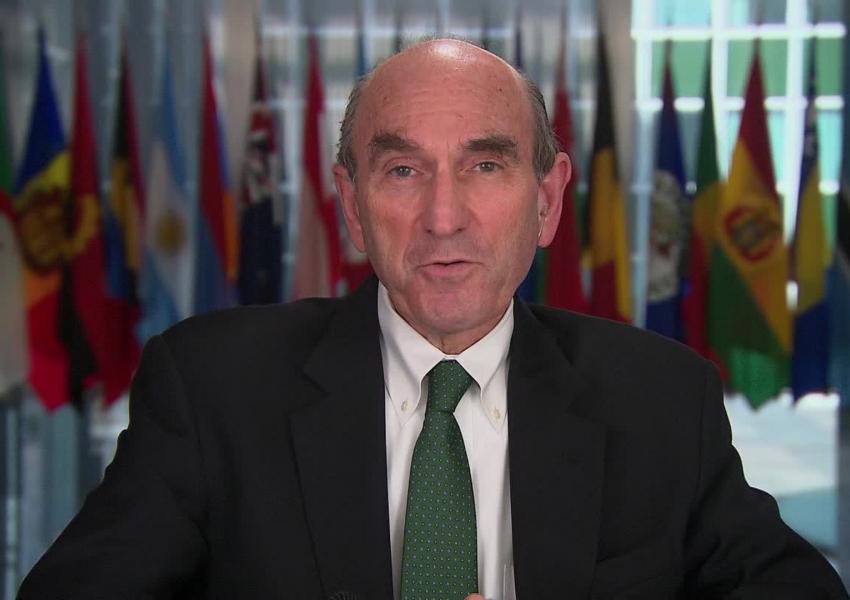 Abrams: More Sanctions To Come; Next President Will Use Sanctions As Leverage

Elliott Abrams, the US Special Envoy for Iran and Venezuela has told Israeli reporters that the Trump administration’s goal is to “slap as many sanctions as possible on Iran until January”.

Abrams, who visited Israel this week to discuss the future of the middle east in case of a Biden presidency, also stated it does not matter who the president is on January 20, since there was always a plan to use sanctions to negotiate with Iran.

“It doesn’t really matter who is president on January 20, in the sense that there’s going to be a negotiation with Iran anyway. That was the intention of the Trump administration. So that’s not a source of disagreement. Whether it’s possible to go back to the JCPOA (nuclear deal) remains to be seen,” Abrams stated.

He emphasized that although Legally, Biden could lift sanctions on Iran once he entered the White House, the sanctions are unrelated to partisan politics and there is little possibility of them to be lifted any time soon: “We have a maximum pressure sanctions program. If you look at September and October, you will see sanctions being put in place. This will continue in November and December, because it’s unrelated to politics, it’s unrelated to elections. It’s the foreign policy of the US, and it’s based on Iran’s conduct.”

Abrams went on to explain that some of Trump’s sanctions on Iran that were not related to the nuclear deal and were mostly about Iran’s aggression in the region and violations of human rights could be reversed, but said he has a hard time seeing any president would do that without a change in Iran’s behavior as the “largest state sponsor of terrorism in the world.”

“The goal is to slap as many sanctions as possible on Iran until January 20,” he added. “We have a lot of leverage as a result of that pressure. So our view is that that leverage should be used, not discarded. Using that leverage, it should be possible to get Iran to stop doing a number of the things that it is doing, including their nuclear activities.”

“The regime is in a situation in which they really need these sanctions lifted. And if we demand changes in their conduct, I don’t think they have another option,” Abrams continued.

He concluded: Five presidents of the US, consecutively, have said that they will not permit Iran to get a nuclear weapon. That is also the Israeli position. Not only would that be the position of the next president, whoever will be elected in 2024 will have that position.”

The United States left the Iran nuclear deal, also known as the Joint Comprehensive Plan of Action (JCPOA) in 2018, calling it the worst deal ever made. Since then, the Trump administration administered the “maximum pressure” plan, consisting of numerous sanctions on Iran’s oil and mineral and weapons industries, and also officials that were involved in violations of human rights.

Many Islamic Republic officials have expressed their satisfaction with the potential Biden presidency, with some stating that the new administration must compensate Iran for the damages during the Trump administration.

City officials in Iran's capital Tehran are planning to put locks on large waste containers in the streets to prevent garbage pickers from accessing waste. END_OF_DOCUMENT_TOKEN_TO_BE_REPLACED

The Biden Administration has confirmed to the US Congress that sanction imposed by its predecessor on Iran have drastically reduced Iran's trade with the world. END_OF_DOCUMENT_TOKEN_TO_BE_REPLACED

The UK government said on Sept 20 that Britain would "not rest" until all its dual nationals being held in Iran were returned home. END_OF_DOCUMENT_TOKEN_TO_BE_REPLACED