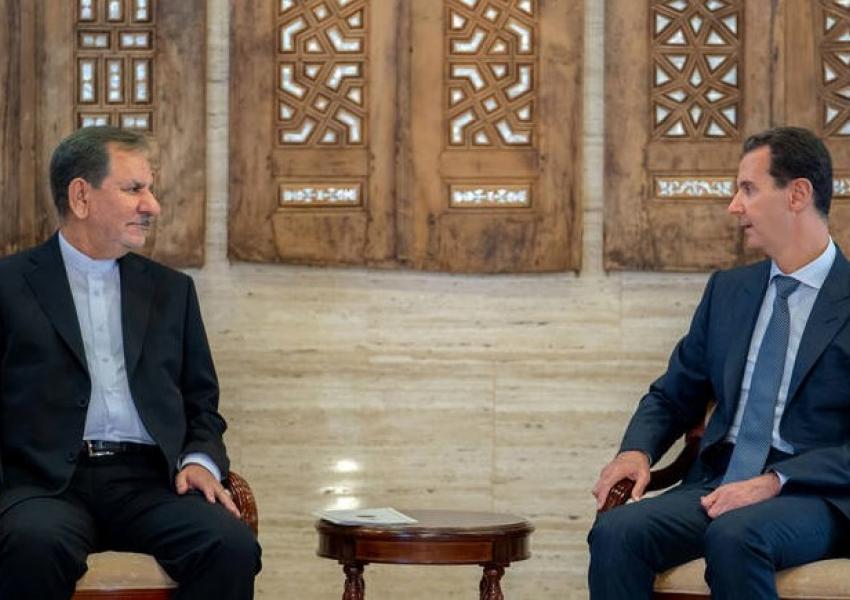 Assad: I’m Grateful to the Supreme Leader of the Islamic Republic

According to ISNA, Assad said on Tuesday, January 29: “I am deeply grateful for Iranian nation’s support of Syrian people…we will not forget the support and help of Iran’s government and people during the war with terrorism.”

He also said that his country wants to cooperate with Iran for mutual economic development.

The head of Iran’s Central bank who has also traveled to Syria with Jahangiri announced an agreement between the central banks of Iran and Syria for monetary transfers “for the currencies of the two countries and currencies other than Dollar.”

Jahangiri mentioned power plants, roads, railroads, and mining as important fields of cooperation between the two countries and suggested to build a “shared railroad” to connect the Persian Gulf to the Mediterranean Sea.

Trade between Iran and Syria is currently about $150 million. According to estimates, Iran has spent billions of dollars in Syria to support the Assad regime. Mike Pompeo, the U.S Secretary of State warned Syria in October that if Iranian forces do not leave Syria, Damascus will not receive any money for rebuilding.

City officials in Iran's capital Tehran are planning to put locks on large waste containers in the streets to prevent garbage pickers from accessing waste. END_OF_DOCUMENT_TOKEN_TO_BE_REPLACED

The Biden Administration has confirmed to the US Congress that sanction imposed by its predecessor on Iran have drastically reduced Iran's trade with the world. END_OF_DOCUMENT_TOKEN_TO_BE_REPLACED

The UK government said on Sept 20 that Britain would "not rest" until all its dual nationals being held in Iran were returned home. END_OF_DOCUMENT_TOKEN_TO_BE_REPLACED