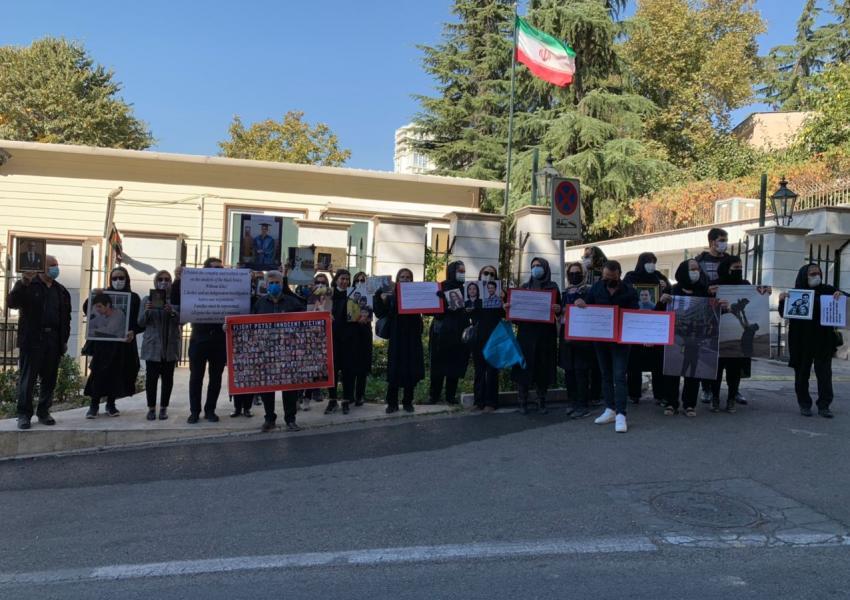 After a Ukrainian delegation arrived in Tehran on Monday, some family members of the Ukrainian flight 752 victims that were killed by IRGC missiles, gathered in front of the Foreign Ministry building and demanded to speak with the visiting delegation.

Videos on social media on Tuesday show the families gathering in front of the Foreign Ministry’s Center for Political and International Studies (where the talks are held).

The families told the deputy foreign minister and chief Iranian negotiator, Mohsen Baharvand, that they want a member of the Ukrainian negotiating team to meet with the families and hear them.

In one video, the families are chanting: “I won’t forgive, I sigh every day and night.” One family member protests the negotiations over the compensation, and says: “First the trial, then negotiations.”

In response, Baharvand said his authority is limited and he can only ask the judiciary officials to have a meeting with the families and listen to their demands. Interrupting him, a protester yelled: “Our judiciary is not independent, legislature and the president have no authority either.”

The second round of negotiations about the shooting down of the Ukrainian flight 752 by the Islamic Revolution Guards Corps began on Monday and lasted two days.

After meeting with Foreign Minister Javad Zarif, the head of Ukrainian delegation Yevgeny Yenin announced that his country welcomes Tehran's willingness to pay equal compensation to all the families of the victims regardless of their nationality. However, he had previously pointed out that the issue of compensation will not be discussed in the negotiations and the Ukrainian delegation’s main goal is to find the whole truth about the disaster.

In a video message released on Monday, Yenin said, “Iran has previously confirmed that the plane was shot down, and now it is our duty to uncover the truth, whether this was a human error or the result of wrong calculations in the Iranian air traffic control.”

Hamed Esmailioun, who lost his wife and child in the flight, announced that flight 752 victims’ association does not consider the incident a case of “human error” and seeks justice for the victims.

Ukraine has repeatedly said the most important issue is a full and genuine report by Iran, disclosing all the details of how a Revolutionary Guards air defense system fired two missiles at the airliner as it took off from Tehran in the morning of January 8. All 176 people on board died after the plane crashed.

City officials in Iran's capital Tehran are planning to put locks on large waste containers in the streets to prevent garbage pickers from accessing waste. END_OF_DOCUMENT_TOKEN_TO_BE_REPLACED

The Biden Administration has confirmed to the US Congress that sanction imposed by its predecessor on Iran have drastically reduced Iran's trade with the world. END_OF_DOCUMENT_TOKEN_TO_BE_REPLACED

The UK government said on Sept 20 that Britain would "not rest" until all its dual nationals being held in Iran were returned home. END_OF_DOCUMENT_TOKEN_TO_BE_REPLACED