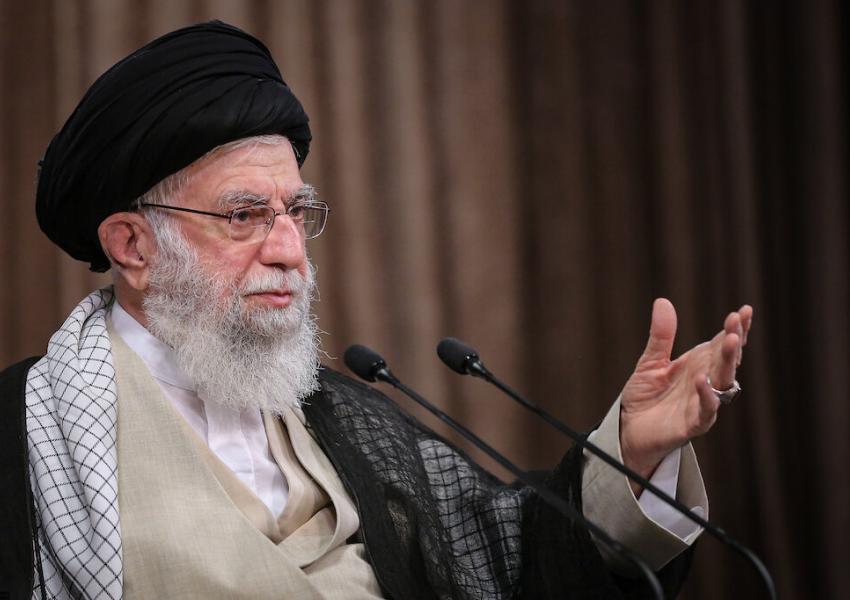 No Mention Of ‘Snapback’ In Khamenei's War Anniversary Speech

Something was missing from Ayatollah Ali Khamenei’s speech in Tehran Monday morning marking the 40th anniversary of the beginning of Iran-Iraq war. In more than hour broadcast live, Iran’s supreme leader made no mention of the United States’ decision to unilaterally ‘reimpose United nations sanctions’ on Iran.

Confounding expectations of a fiery response, Khamenei’s speech hinged around anecdotes of the 1980-88 war, including stories of elderly ladies making jam and baking bread for the soldiers. But he did lash out at the United States, the former Soviet Union, the United Kingdom, France, Germany, and even former Yugoslavia for helping Saddam Hussein against the Islamic Republic.

Khamenei, who has been in self-isolation for over seven months, looked pale and weak, and only remotely like the firebrand of just a few months ago. Despite a reputation as a good speaker, he lost track of his speech a couple of times. Although Khamenei held notes in his hand, he even forgot the name of his favorite military commander, the Revolutionary Guards’ Mohammad Hossein Bagheri, and after a long pause called him “the gentleman commander who is the chief of staff.”

Khamenei drew a picture of an isolated Islamic Republic confronting a hostile world. “In the eight-year war on Iran, Saddam was just a tool in the hands of big powers like the US that were seriously harmed by the 1979 Revolution, or governments that worried about the creation of a new Islamic power in the region,” he said. “The USSR, some European countries and NATO were against us.”

Without referring to the execution of Iran’s top generals immediately after the 1979 Islamic revolution, Khamenei continued: “During the first years of the war, which were shortly after the Islamic Revolution, the armed forces weren’t in good shape and we were extremely short of equipment. These persuaded the enemy to attack us. Imam [Ruhollah] Khomeini [supreme leader until 1989] managed the war amazingly under such conditions.” 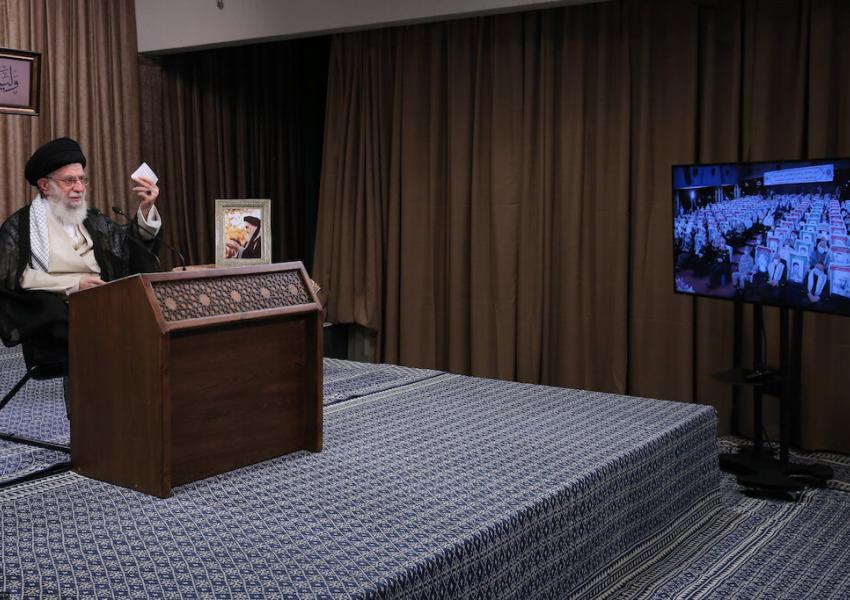 Khamenei also did not mention that hundreds of thousands of Iranians were killed during the long war as Khomeini demanded victory not just over Iraq but against Israel, and at times even insisted that the war should continue until all evil and sedition in the world were overcome.

Although the war brought defeat and misery for both Khomeini and Saddam Hussein and left both nations destitute, Khamenei claimed: “The US and other powers started the war to overthrow the Islamic Republic, but they were defeated. Iran’s victory in this war is as obvious as the sun. The whole world used all their strength for eight years but failed to achieve their goal.”

Khamenei lauded Khomeini for “drinking the chalice of poison” and agreeing to UN Resolution 598, ending the war eight months after Saddam accepted the resolution and withdrew his forces to Iraq’s borders.

Iranian news agencies had reported on Sunday that Khamenei would speak to one million war veterans. But most of those caught on 24 monitors around the venue were too young to be the veterans of a war that started 40 years ago.

Khamenei made only one brief reference to current developments, advised Iranians to take the coronavirus pandemic seriously and to observe social distancing rules. Nonetheless, those listening to his speech via video links were sitting closely together albeit wearing face masks.

In a division of labor, it appears President Hassan Rouhani was tasked with responding to the snapback of sanctions. Last week, ahead of the impending US announcement, Rouhani congratulated Iranians on what he called a US “defeat” and on Sunday he threatened Washington with “stringent measures” if it took any practical measure against Tehran.

It is difficult to guess why Khamenei delegated Iran’s response to Rouhani. Perhaps, Iran’s ruler is waiting to see what the Trump administration will do in practice, both directly against Iran and against other world powers who do not accept the right of the US to impose sanctions the UN voted to lift.

City officials in Iran's capital Tehran are planning to put locks on large waste containers in the streets to prevent garbage pickers from accessing waste. END_OF_DOCUMENT_TOKEN_TO_BE_REPLACED

The Biden Administration has confirmed to the US Congress that sanction imposed by its predecessor on Iran have drastically reduced Iran's trade with the world. END_OF_DOCUMENT_TOKEN_TO_BE_REPLACED

The UK government said on Sept 20 that Britain would "not rest" until all its dual nationals being held in Iran were returned home. END_OF_DOCUMENT_TOKEN_TO_BE_REPLACED