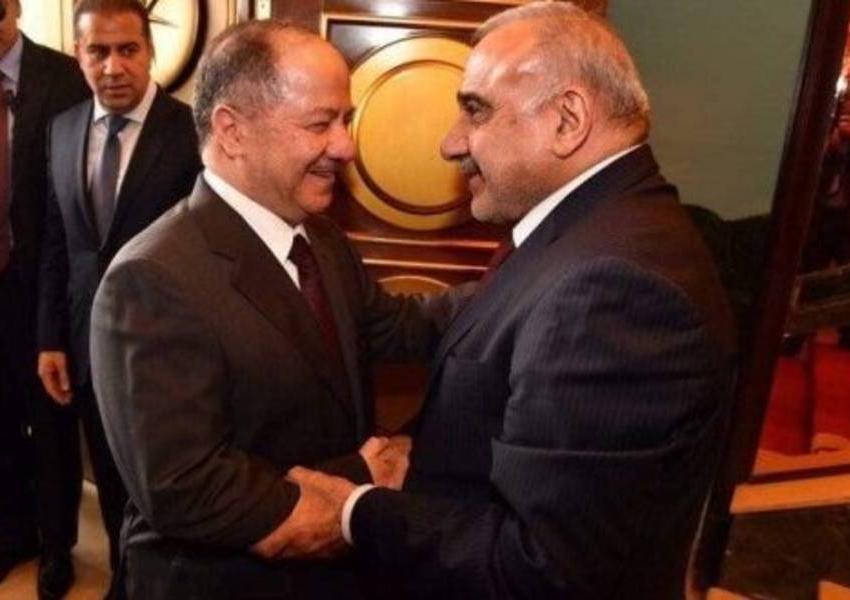 What Was Barzani After in Baghdad?

Masoud Barzani, the former head of the Kurdistan region of Iraq and the leader of the Kurdistan Democratic Party, was welcomed by Mohamed al-Halbousi, Iraq’s speaker of parliament, at Baghdad airport on Wednesday 21th of November. He took this trip on an invitation by some Iraqi parties.

Barzani also went to Najaf to meet Muqtada al-Sadr, the leader of the Sadrist Movement and the Saraya al-Salam.

Despite the official announcement that the purpose of these visits was to strengthen the ties between Erbil and Baghdad after the Kurdistan independence referendum a year ago, an observer of the Iraqi politics would know that Barzani was seeking something more important to him: to push aside his main opponent, the Patriotic Union of Kurdistan.

The Patriotic Union of Kurdistan and the Kurdistan Democratic Party are two influential parties in Kurdistan, both with military capabilities. They have involved in political and military battles against each other and tried to eliminate the other one previously; however, neither has ever succeeded.

Jalal Talabani and Masoud Barzani, the leaders of these parties signed a peace agreement in 1998 owing to Madeleine Albright’s mediation, the US secretary of states at the time. Since then, not only have they complied with the terms of the agreement mostly because of Iraq’s regional situation, but they both tried to bridge the gaps and move towards a collaborative administration of Iraqi Kurdistan.

After Talabani’s stroke when he was serving as the president, a few fractions turned up inside the Patriotic Union of Kurdistan. When he died later in October 2017, these factions appeared more confidently.

The existence of these factions inside the Patriotic Union of Kurdistan has made running the business of Kurdistan more difficult for the Kurdistan Democratic Party, and for Barzani in particular. This is added to the fact that on the one hand, Hero Ibrahim Ahmed, Talabani’s wife, and Bafel, his son, are radically against Barzani’s agenda, and on the other, they have warm relations with the Islamic Republic of Iran, the IRGC, and Qassem Suleimani, its Quds forces commander.

The cooperation between the two parties in Kurdistan was at its best after the overthrown of Saddam Hussein in Iraq. At the time, it was with no efforts whatsoever to agree that Talabani should become the president of Iraq and Barzani the head of government in the Kurdistan region.

It was not long after Talabani’s death that the relationship turned cold and the Kurdistan Democratic Party accused some factions of the Patriotic Union of Kurdistan to assist Iran’s IRGC in invading Kirkuk which crushed the attempts for Kurdistan independence.

Politicians and the media close to the Kurdistan Democratic Party unequivocally claim that the withdrawal of the Patriotic Union troops from Kirkuk was Qassem Suleimani’s plan. They call it the ‘great treason of October 16th’ which was aimed to destroy the results of the referendum for Kurdish independence and defeat the Democratic Party’s troops in the city.

It is not unprecedented for either of these two parties to make deals with foreign powers; the Democratic Party managed to oust the Patriotic Union from Erbil in 1996 because they sought help from Iraqi army during Saddam’s rule. This incident is known as “the treason of November 31st’ by members of the Patriotic Union.

After the conflict over Kirkuk and the independence referendum, the last tension between the two parties happened when they could not agree on a candidate for Iraq’s presidency. As a result of a political consensus, the presidency in Iraq belongs to Kurds.

Despite Barzani’s efforts to send Fuad Hussein to Baghdad as the president, it was the Patriotic Union that managed to secure Barham Salih as the president of Iraq. This caused enormous dissatisfaction in the Democratic Party.

Barzani did not enjoy a calm and good relationship with Baghdad and Nouri al-Maliki, the former prime minister, for years. But he took this trip to Baghdad to reconcile the relationship and try to convince Baghdad to strip the Patriotic Union of its privileges; those that the Patriotic Union has gained from Iraq’s government and Iran’s IRGC as a reward to its opposition to Barzani and the Democratic Party.

Even if this new friendship, between Barzani on one side and the Iraqi government and pro-Iran Shia militias on the other, is not a sincere act, it will probably be able to weaken the Patriotic Union as long as it suffers from disunity among its internal factions.

Aligned with the same narrative, right after Barzani’s trips, the Kurdish media reported that Masrour Barzani (Masoud’s son and the head of Security in Kurdistan) met with Qassem Suleimani (the IRGC’s Quds forces commander).

The media outlets close to the Democratic party report that Masrour Barzani delivered a message from the Americans to Iran. Nevertheless, the US seems to have much better relations with the Patriotic Union and it would have been more sensible to leverage the Union for the delivery of any messages to Iran.

All these signs plus the warm meeting between Barzani and Adil Abdul-Mahdi, Iraq’s prime minister, show that even if only on the surface, both sides have “let bygones be bygones”, so to speak.

This attack was resisted by the Freedom Movement and its members. Although they held a few peaceful demonstrations against this attack, they were all suppressed, and the offices were forced to close down. It was praised highly by Turkey.

While Barzani is improving his relations with Baghdad and weakening the Patriotic Union’s position, the Union started an attack on Freedom Movement and PKK so that they can leverage Turkey’s backing against the Democratic Party.

City officials in Iran's capital Tehran are planning to put locks on large waste containers in the streets to prevent garbage pickers from accessing waste. END_OF_DOCUMENT_TOKEN_TO_BE_REPLACED

The Biden Administration has confirmed to the US Congress that sanction imposed by its predecessor on Iran have drastically reduced Iran's trade with the world. END_OF_DOCUMENT_TOKEN_TO_BE_REPLACED

The UK government said on Sept 20 that Britain would "not rest" until all its dual nationals being held in Iran were returned home. END_OF_DOCUMENT_TOKEN_TO_BE_REPLACED