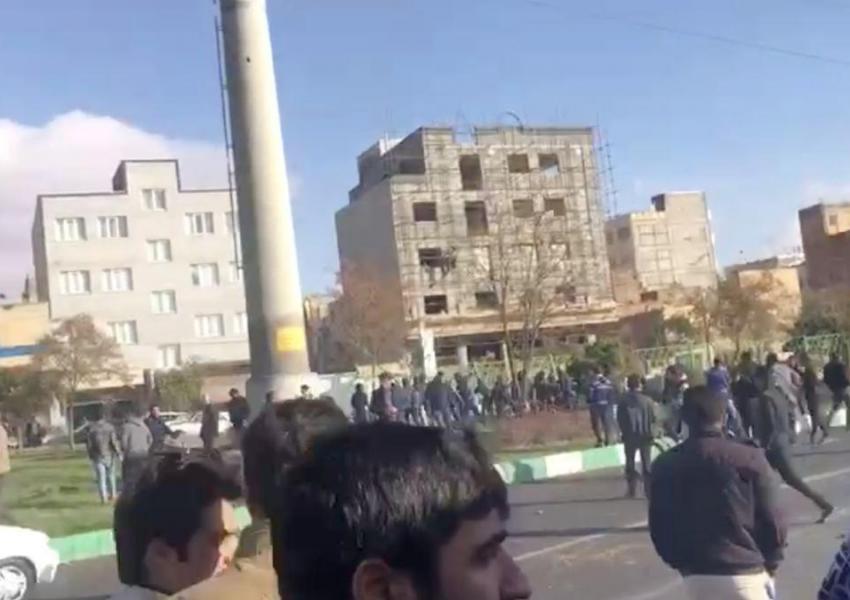 Protests In Two Iranian Cities In Support Of Azerbaijan

Images on social media Thursday evening showed protests in Tehran and Tabriz in support of the Republic of Azerbaijan in its military conflict with Armenia.

The videos show protesters chanting “(Nagorno-) Karabakh is ours, it will remain ours” and “Karabakh or death” in Azeri language.

There were also some clashes between the protesters and the security forces that tried to disperse the crowd.

On Wednesday, the organizers had published posters on social media calling for gatherings to protest in support of Azerbaijan.

At the same time, several representatives of Ayatollah Ali Khamenei, the leader of the Islamic Republic, in four of Azeri-majority provinces of Iran released a joint statement in support of the Republic of Azerbaijan.

Representatives of Ali Khamenei in East Azarbaijan, West Azarbaijan Zanjan, and Ardebil said in the statement that there is no doubt that Karabakh belongs to the Republic of Azerbaijan and it has been occupied and must be returned to Azerbaijan.

Calling Azerbaijani casualties in the war “martyrs,” the statement highlighted Iran’s consistent support for the territorial integrity of the Republic of Azerbaijan. “The occupation of Azerbaijan [by Armenia] would have extended to Baku [the Azerbaijani capital] if it weren’t for the support of the Islamic Republic when Karabakh was first occupied,” they said, referring to Armenia’s intervention in the early 1990s after the collapse of the Soviet Union.

The statement goes on to say that Iran has “generously” granted access to Nakhchivan road to Azerbaijan.

The media of the Republic of Azerbaijan and Iran’s pan-Turkish groups have accused Iran of assisting Armenia and allowing Russia to transit military equipment to Armenia through Iran. Iranian officials, including President Hassan Rouhani's Chief of Staff Ali Vaezi, have vehemently denied this.

The statement comes at a time when the spokesperson for the Ministry of Foreign Affairs already announced that the Islamic Republic’s policy is to “help and facilitate dialogue between two sides”.

On Thursday, as the military conflict between Azerbaijan and Armenia entered its fifth day, the presidents of US, France, and Russia released a joint statement calling on the two countries to cease the conflict immediately.

PThe statement called for an “immediate ceasefire” between Azerbaijan and Armenia and asked them to begin negotiations to end the conflict without preconditions.

Macron said on Thursday that Azerbaijan’s aggression is unjustifiable and said he has irrefutable evidence that shows “Syrian jihadi fighters” have left Syria to fight in the conflict in Nagorno-Karabakh.

In the past three decades, there have been several heavy military conflicts in Nagorno-Karabakh and almost 30,000 were killed in these conflicts.

City officials in Iran's capital Tehran are planning to put locks on large waste containers in the streets to prevent garbage pickers from accessing waste. END_OF_DOCUMENT_TOKEN_TO_BE_REPLACED

The Biden Administration has confirmed to the US Congress that sanction imposed by its predecessor on Iran have drastically reduced Iran's trade with the world. END_OF_DOCUMENT_TOKEN_TO_BE_REPLACED

The UK government said on Sept 20 that Britain would "not rest" until all its dual nationals being held in Iran were returned home. END_OF_DOCUMENT_TOKEN_TO_BE_REPLACED