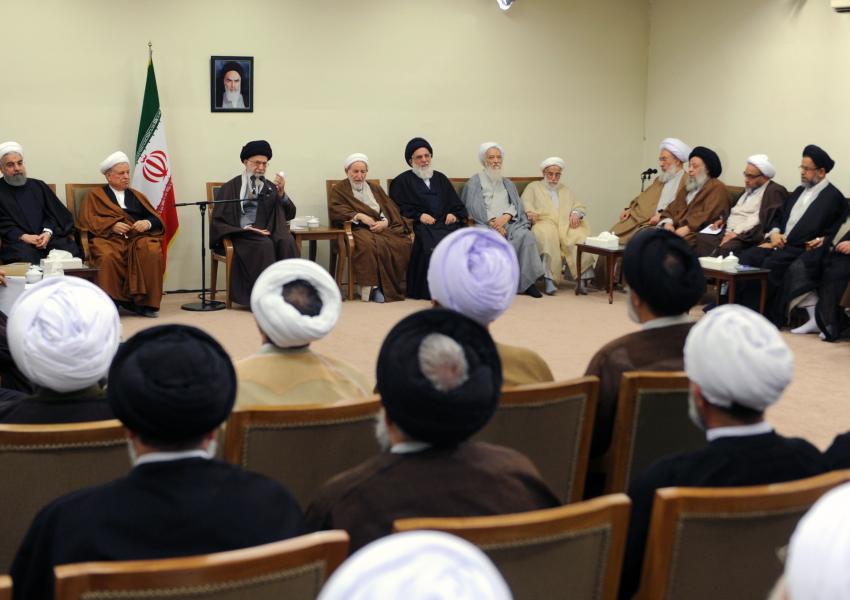 Some Iranian social media users are dismissing Supreme Leader Ali Khamenei’s ban on American and British Covid-19 vaccines as a politically-motivated rather than scientifically-based decision. They point out that many Iranian clerics and their families have sought medical treatment abroad, particularly in Britain.

Khamenei banned importing the Covid vaccine from the United States and Britain in a pre-recorded speech broadcast on Friday [January 8], leaving Iranians waiting months for Chinese, Russian and homegrown vaccines as well as one co-produced with Cuba. Rights groups including Amnesty International have criticized Khamenei’s ban, and said politics should not be involved in the decisions related to health.

Since the ban was announced, social media users have criticized double standards of senior clerics, who they allege travel abroad for the latest treatments in Europe. Some claim Khamenei has received the vaccine himself.

Mohammad-Mehdi Sadrolsadati, a social-media activist whose brother Rouhollah is a member of the Experts Assembly, listed on Instagram on Monday several cases of high-ranking clerics receiving treatment in Britain. “Britain is the same country and it has been normal in the past for the authorities and their relatives to place their trust in British doctors,” he wrote. “None of them ever thought British doctors may harm them in any way. It therefore seems that the ban on the British vaccine is not a mere medical issue, it's a kind of diplomatic [move].”

The list included Mahmoud Hashemi Shahroudi, former Chief Justice, who received cancer treatment in hospital in Germany in 2017. In December 2019, his son Seyed Ala in an interview with Hawzah News said his father had been advised by Khamenei to “listen to doctors” but had instead placed his trust in proponents of traditional medicine after treatment abroad and his illness “got out of control.” Shahroudi died in December 2018.

Other high-ranking clerics listed as receiving medical treatment overseas were Ayatollah Abbas Vaez Tabasi, Custodian of the Shrine of Imam Reza in Mashhad, who was operated on in London in 1992; Ayatollah Mohammad-Reza Mahadavi-Kani, former chairman of the Expediency Council, who was treated for heart problems in London in 1985, and Abdolkarim Mousavi-Ardabili, former Chief Justice, who received medical check-ups in Europe in 1982.

Many of the names were taken from the memoires of the late Akbar Hashemi-Rafsanjani, who mentioned his own wife’s visit to London for medical treatment as well as the wife of the founder of the Islamic Republic Ruhollah Khomeini in the 1980s.

There are rumors about Khamenei’s daughter-in-law and son Mojtaba receiving fertility treatment in London in the late 1990s. Some allege Khamenei’s grandson was born in a hospital in London. Mojtaba Khamenei’s father-in-law, former Parliament Speaker Gholam-Ali Haddad-Adel, in 2013 denied the rumors.

Conspiracy theories about western vaccines have been aired extensively by Iranian hardliners but Khamenei’s apparent endorsement of such theories has caused deep concern among Iranians hoping for the arrival of the US-made Pfizer and Modena and Britain’s Oxford vaccines.

City officials in Iran's capital Tehran are planning to put locks on large waste containers in the streets to prevent garbage pickers from accessing waste. END_OF_DOCUMENT_TOKEN_TO_BE_REPLACED

The Biden Administration has confirmed to the US Congress that sanction imposed by its predecessor on Iran have drastically reduced Iran's trade with the world. END_OF_DOCUMENT_TOKEN_TO_BE_REPLACED

The UK government said on Sept 20 that Britain would "not rest" until all its dual nationals being held in Iran were returned home. END_OF_DOCUMENT_TOKEN_TO_BE_REPLACED