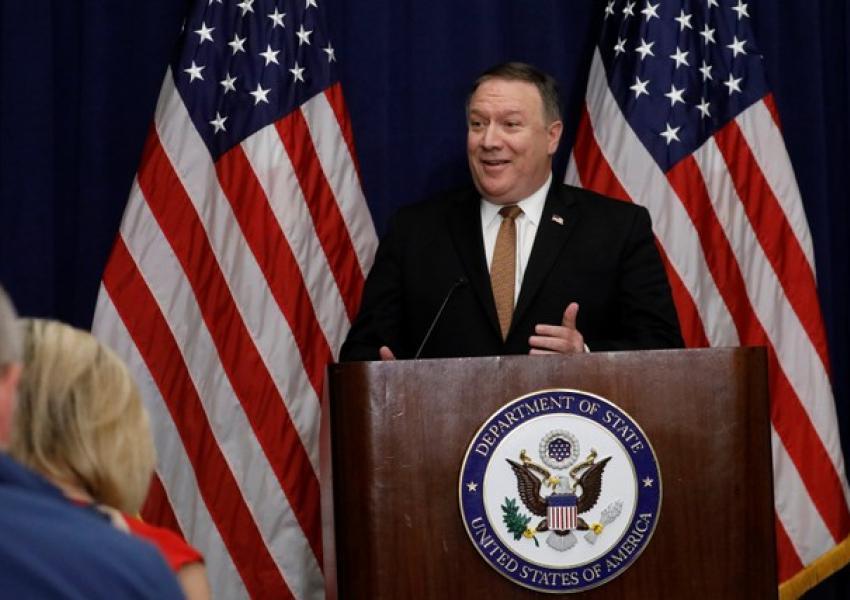 Without embargo, Tehran will become an arms dealer for Maduros and Assads of the world: Pompeo

In a press briefing on Wednesday, U.S Secretary of State Mike Pompeo emphasized the importance of indefinite weapons embargo on Iran and said if the embargo ends, “Tehran will become an arms dealer for the Maduros and Assads of the world.”

Pompeo began his comments about Iran by mentioning several cases of honor killings in the past month, saying: “For 40 years, corrupt Iranian leaders have condoned murder, dehumanized women, and ignored cries for justice.  When will they stop this unspeakable wicked assault on human dignity?”

He then began speaking on the importance of the arms embargo on Iran: “If Iran is allowed to buy weapons from the likes of China and Russia, more civilians in the Middle East will die at the hands of the regime and its proxies.  It’s that straightforward.  Tehran will become an arms dealer for the Maduros and Assads of the world.  Sworn enemies of Israel like Hamas and Hizbollah will be better armed.  European nations will be put at risk.”

“Our objective is not to extend the arms embargo for another short period of time.  That’s how we got into this mess.  The arms embargo should be lifted when the Islamic Republic of Iran begins to behave in a way that is consistent with the ability to move arms around the world, to purchase – to act in a way that’s consistent with the way normal nations act,” Pompeo clarified

He also mentioned the IAEA report about Iran refusing to allow inspectors to visit two nuclear sites in the country, and clarified that the matter is not about the nuclear deal (JCPOA): “The Iranians continue to deny access to the IAEA.  This is not about the JCPOA, this is about the NPT framework, the safeguards provisions that every nuclear power signs up for and that the Iranians have agreed to.  This is outside and separate from the JCPOA.”

City officials in Iran's capital Tehran are planning to put locks on large waste containers in the streets to prevent garbage pickers from accessing waste. END_OF_DOCUMENT_TOKEN_TO_BE_REPLACED

The Biden Administration has confirmed to the US Congress that sanction imposed by its predecessor on Iran have drastically reduced Iran's trade with the world. END_OF_DOCUMENT_TOKEN_TO_BE_REPLACED

The UK government said on Sept 20 that Britain would "not rest" until all its dual nationals being held in Iran were returned home. END_OF_DOCUMENT_TOKEN_TO_BE_REPLACED